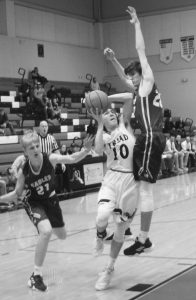 Utilizing a nine-for-11 fourth quarter at the free throw line, the Triad basketball Knights eked out a 50-48 win over Civic Memorial on Friday, February 15 in Troy.

In a game that was close throughout, Triad rallied back from a seven-point, 38-31 deficit at the end of three quarters to take the win.

The fourth quarter began with the two teams swapping three-point plays before the Knights went on a 9-0 run to take a 43-41 edge. The Triad rally included a trey and a conventional basket by Jonah Ogden, a bucket by Sam Yager and a pair of free throws by Nate Winslow.

The Eagles took their final lead of the game on a basket by Alex Reams and two free throw by Bryce Zupan that made it a 45-43 contest.

Six consecutive free throws by the Knights’ Luke Cox put Triad ahead 49-45 with 24 seconds left in the game. The Knights would later get a free throw from Michael Tentis to give them their final point of the game.

Over the final 17 seconds of the contest, Zupan scored a field goal and a free throw, but it proved to be too little.

Civic Memorial, however,  did have an opportunity to tie the game in the closing moments of the game. After Zupan made the first of two free throws with 2.6 seconds left, he  deliberately missed his second charity shot.  The Eagles’ Jacob Coleman came up with the rebound to the right of the lane. He hurriedly fired up a shot that rimmed in and out as time expired.

For the game, Triad went 11-for-18 from the free throw line, but outside of the fourth quarter, they were only 2-for-7 from the charity stripe. Civic  Memorial was 8-for-10 from the line, including Zupan’s deliberate miss.

A key to the Triad victory was its defensive effort down the stretch. The Knights forced four turnovers in the final two minutes of the game to keep CM at bay.

Triad got 17 points out of Cox, who connected on five of 21 shots from the field, but converted six of seven free throw chances into points.

Tentis finished the evening with 11 points, while Winslow ended with nine tallies.

Scoring a game-high 24 points for the Eagles was Zupan.

Prior to the game, Jonah Ogden was honored as the Knights’ only senior player. In addition, fellow senior, student manager Jason Mersinger, was also recognized, as were senior cheerleaders Abby Eggemeyer, Gabby Daughtery, Hannah Sury and Chloe North.

On Tuesday, February 12, the Knights fell to the Freeburg Midgets 63-46 in a non-conference home game.

Freeburg won each quarter and was able to extend its lead from frame to frame. After the first period, the Midgets led 13-8. At the half, they held a 27-19 lead. The three-quarter post found Freeburg up 47-33.

Winslow was Triad’s leading score with 15 points. Cox added 10 tallies for the Knights.

Connor Diecker scored a game-high 21 points for Freeburg. He went 8-for-11 from the field and 4-6 from the free throw line.

Luke Ervie came up with 11 points for the Midgets.

Triad was slated to face the Mascoutah Indians in Mascoutah on Tuesday, February 19 before finishing the regular-season on Friday, February 22 at Highland.

The Class 3A playoffs are scheduled to start for the Knights on Monday, February 25 when they take on the Mt. Vernon Rams at the six-team Salem regional. With a win against Mt. Vernon, Triad would advance to a regional semifinal contest asgainst Salem. The other squads competing in Salem are Highland, Benton and Centralia.

The regional final is set for Friday, March 1.