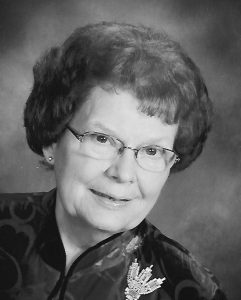 Gold Medal Flour and Nestle Toll House Chocolate Chips lost their most loyal customer on February 23, 2019 with the passing of Elizabeth (Betty) Ann Hodapp of Marine,.

Over the course of her 83 years, Betty baked more than one million chocolate chip cookies using a closely held recipe she could recite by memory even as she entered the late stages of Alzheimer’s. In all that time, she is known to have baked only one bad batch. In her defense, her youngest daughter was born a few hours later.

Born on January 15, 1936, Betty grew up on a family farm outside of Marine, Ill. With the possible exceptions of being chased by chickens, and butchering day, she enjoyed an idyllic childhood. Upon her graduation from Highland High School (Class of 1953), she enrolled in the Weaver Airline Personnel School of Kansas City. After realizing that a career as a stewardess would likely require air travel, she opted instead to put her exceptional typing and shorthand skills to work at the Edwin F. Lowenstein Insurance Agency in Highland.

In addition to being suspicious of how Betty paid for the car she drove to work on her $35/week salary, Mr. Lowenstein had an uncanny need for dictation whenever Betty had a lunch date with a young suitor named John Hodapp. Nevertheless, she persisted in her job until marrying John on Feb. 9, 1957 and convincing him to open his own eponymous insurance agency. The small, home-based business would eventually finance the college educations of the eight children they had together.

In one particularly good year – known in the family for unknown reasons as The Year of the Contingency – John bought Betty a fur stole and a wig for Christmas. Neither were of particular value when she waited tables at the annual church chicken dinner or canned vegetables from the huge family garden. But they hung at-the-ready in the living room closet for many special Saturday nights of fine dining at Michael’s Restaurant and dancing at the Lindendale Ballroom.

A homemaker who put June Cleaver to shame, Betty was also a trailblazer. She discovered Martha Stewart long before she became a household name. A photo of the two taken at a home entertaining workshop in 1988 was displayed prominently on Betty’s dining room hutch – until Martha divorced her husband. “What good is a pretty place setting if you don’t have a happy home?” Betty said in explanation. She eventually forgave Martha and the photo re-emerged, at least until Martha was sentenced to the federal penitentiary. Upon her release from jail, the photo was again restored to its place of honor. One of the many letters Betty wrote to Martha was later featured in an advertising campaign for Martha Stewart Living magazine.

Betty enjoyed many, many things. Among those things were pantyhose, her Eureka vacuum sweeper, Kevin Killeen novels, her weekly hair appointments, the air-conditioned kitchen in the family camper, Palmolive dish soap, her home security system, daily visits from her dear neighbor Sandy, her cookie sheets and dish towels, and the two washing machines John purchased so she wouldn’t have to go up and down the basement stairs so frequently on laundry day, which was every day.

None of these things were nearly as important to her as the time she selflessly spent caring for her beloved husband and ever-growing family.

Heartfelt thanks go to the caregivers at San Gabriel Memory Care in Highland, who provided not only a beautiful kitchen for Betty to bake in as recently as two weeks prior to her death, but also a peaceful and compassionate environment during her transition from this life to the next.

A funeral Mass will be celebrated at 10 a.m. on Saturday, March 2, at St. Elizabeth’s Catholic Church in Marine, where Betty received every single one of her sacraments.

Burial will be at St. Elizabeth Catholic Cemetery, Marine. Those so-inclined are invited to wear pantyhose in her honor.

Mass memorials at St. Elizabeth’s are welcome. Memorial donations in Betty’s name can alternately be made to the Alzheimer’s Association of St. Louis or Divine Mercy Senior Living Center in Maryville.

Spengel-Boulanger Funeral Home was in charge of arrangements.