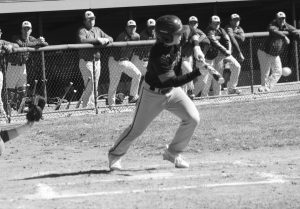 After two losses in the Metro East Classic, the Triad baseball Knights got in the win column on Saturday, March 16 with a 5-0 victory over the Alton Marquette Explorer’s in Alton’s Gordon Moore Park.

“This is our first win of the year, but there’s been signs of life all along,” Triad Coach Jesse Bugger said. “We’re throwing the ball well and our at bats are getting better.

“We’ve got returning players, but not all of them have a ton of experience, so this is a fresh beginning for a lot of guys. I think we have some talent and I think we’ll be alright. When we make mistakes we’re going to learn from them.

“We were good today on the mound, and we were good yesterday (against Benet Academy). We really weren’t bad on Thursday (against Mt. Zion) under adverse conditions, 60-mile an hour winds and everything else. Overall, I’m pleased with the way we started off.”

Triad scored all its runs in the first two innings and relied on four pitchers to hurl a three-hit shutout at the Explorers.

The only run the Knights needed scored in the first inning when Drew Parres took the first  pitch of the game into left field for a base hit. He ended up on third after an infield hit by Nolan McGowan and a walk to Ethan Gratton. With two outs, Parres scored on a base hit by Evan Anderson.

Triad struck for the rest of their runs in the second inning.  The rally began when Zach Tonn reached on an Alton error. A walk to McGowan followed to put runners at first and second. Both scored when Hunter Boyd drove ball over the center fielder’s head for a two-run double.

“Their pitcher had a good breaking ball, but I waited for the fast ball got it, took a right-center approach and took it up the middle,” Boyd said. “I had a feeling that it would get over the center fielder’s head when I hit it. I had a lot of backspin on the ball. I hit it well.”

Boyd would score on a base by Joe Wade, who moved to second on an unsuccessful attempt to throw Boyd out at the plate. The extra base proved to be important as Gratton followed with an RBI single.

“Starting with a 5-0 lead is  my favorite way to play,” Bugger said. “The boys swung the bats better from the beginning. And they made a nice adjustment. The guy we faced yesterday was throwing in the high 80s. I think he touched 89 a couple of times.  We didn’t see that today. Sometimes that can be an adjustment that takes a little while to make.”

Triad appeared to score in the third inning, but that run was negated when a Knight runner was called out on an appeal at third. The umpire ruled that the runner missed the base while trying to score on a double by Parres. Triad also lost a runner in the sixth inning when Parres was thrown out at the plate trying to score on a grounder to third.

The lost runs turned out to be a moot point, as the Explorers failed to dent the plate against  Triad pitching.

Drew Straub was the starter for Triad and got the win. He worked the first three innings, giving up a walk and striking out one Explorer.

Logan Broska went 1 1/3 innings for the Knights. He did not allow a hit but did give up four walks. Jordan Donato followed Broska to the mound. Donato gave up an infield hit and a walk while striking out two hitters. Anderson pitched a scoreless seventh inning despite giving up a hit and a walk in the frame.

Marquette left the bases loaded in the fourth, fifth and seventh innings.

Zach Tonn had two hits in the game for the Knights to go along with a run scored. Wade had a hit, a run scored and a run driven in for Triad.

The win over Alton Marquette comes the day after the Knights dropped a 3-2 extra-inning decision against Benet Academy out of Lisle. Benet Academy earned the walk-off victory by scoring the winning run in the bottom of the eighth.

Triad got two hits, a run scored and a run batted in from Wade, while Boyd, Parres, Tonn each had a hit for the Knights.

The Knights utilized three hurlers in the game. Jordan Lewis was the losing pitcher for the Knights, having surrendering Benet Academy’s eighth inning run on two hits and a walk.

He was preceded on the mound by Gratton and Wade. Gratton threw 4 1/3 scoreless innings. He scatter six hits and struck out three hitters.

The Triad season began with an 8-3 loss to Mt. Zion on March 14 at Southern Illinois University Edwardsville.

The Knights fell behind 2-0 in the first half inning of the game and Triad never caught up. Triad got single runs in the first, sixth and seventh innings, but trailed 7-1 after four innings of play and 8-2 after six innings of action.

Boyd had two hits and a run batted in for the Knights, while Gratton plated a run with a 1-for-2 day. He also scored a run and had a triple.

Collecting a hit each for the Knights were Anderson, McGowen, Jack Oller and Parres.

McGowen was the pitcher of record for the Knights, working 1 2/3 innings, giving up five runs (four earned) on four hits and two walks. He struck out two hitters.

Broska was touched for a run on two hits in an inning of work, while Straub threw a scoreless frame in which he struck out a batter.