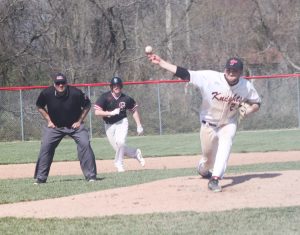 Triad’s Ethan Gratton delivers a pitch during a Saturday, April 6 game against the Granite City Warriors in Troy. The Knights and the Warriors split a twinbill, with the Knights winning game one 14-4 and Granite City taking the nightcap 13-5. (Photo by J.W. Campbell)

In a tale of two contests, the Triad baseball team shined in game one of a Saturday, April 6 doubleheader, but stumbled badly in the nightcap as the Knights and the Granite City Warriors split a doubleheader at Triad.

Triad opened the game with a three-run salvo in the first inning that gave them an early advantage. The Knights parlayed three hits and a Granite City error into three runs in the frame. Collecting a two-run single in the stanza was Evan Anderson, while Ethan Gratton had an RBI single in the inning.

Granite City rallied back with four runs in the top of the third to take a one-run edge.

Jonas Barnes had a sacrifice fly ahead of a run-scoring double by Cameron Hibbets and an RBI single by Austin Bonvicino. A Triad error allowed the fourth run of the inning to score.

Joe Wade scored a run in the bottom of the third to knot the game at 4-4. He started the inning with a base hit to center. The runner moved to second on a wild pitch and advanced from third on a passed ball. From there, he scored on a sacrifice fly by Gratton.

Triad grabbed the lead for good with a four-run fourth. The rally began with back-to-back walks to Drew Parres and Nolan McGowen. Both scored on a double to center by Wade. A single to left by Gratton plated Wade. On the play, an error allowed Gratton to move to third. From there, he score on a sacrifice fly to left by Caleb Goforth that made it an 8-4 contest.

Zach Tonn drove in a Triad run in the bottom of the fifth with a safety to right.

Triad tacked on five additional runs in the bottom of the sixth to end the game on the 10-run mercy rule. The inning featured three Triad hits, a walk and three batters that were hit by a pitch. Ton picked up an RBI when he was hit by pitch with the bases loaded. That was followed by a three-run double to left by Parres. He scored on a base hit to right by Nolan McGowen that ended the game at 14-4.

Coming up with two hits and two runs scored for Triad were Anderson and Wade. Tonn had one safety and two runs batted in.

Jordan Donato picked up the pitching victory in relief of Jack Oller. Donato went 2 2/3 innings, allowing no runs on two walks. He struck out one opposing batter.

Oller threw 3 1/3 innings, giving up three earned runs on four hits and three walks. He had one strike out.

Triad jumped out to a 1-0 lead at the end of an inning when Joe Wade struck out but reached first on a dropped third strike that got away from the Granite City catcher. Another error on the play allowed Wade to reach third. From there he scored on base hit by McGowen.

The Knights expanded their lead to 4-0 in the second. The inning began with a home run over the left-field fence off the bat of Goforth. With one out, Matt Weis singled to right. Jordan Lewis entered the game as a courtesy run for Weis. After a passed ball moved him to second, a Warrior error allowed him to score. Wade drove in the final run of the frame with a base hit to left that drove in Tonn, who had reached on the earlier error.

After that, the wheels began to come off for Triad. Granite City sent 10 hitters to the plate in the fourth as they scored four runs on two hits, two walks and three hit batters. Bennett Smallie drove in two runs with a base hit to left, while the plunkings of  Cole Bartling and Bonvicino each plated a tally.

In the fifth, Granite City once again sent 10 hitters to the plate. This time, three hits and four walks resulted in six Warrior runs. Mason Roehr had the big blow of the inning when he doubled home three runs. The stanza also featured an RBI safety by Bartling and a bases loaded walk to Fred Edwards. A sixth run scored on a wild pitch.

Three runs in the top of the third completed Granite City’s scoring. Smallie and Brennan Haddix each drew a bases loaded walk to chalk up an RBI, while a sacrifice fly by Edwards produced another Warrior run.

Triad’s fifth run of the game scored in the bottom of the fourth when Tonn doubled and scored on a base hit by McGowen.

Bartling was the winning pitcher for the Warriors. He went five inning, allowing two earned runs on 10 hits and a walk. He struck out three Knights.

Triad’s leading hitters were Gratton and Hunter Smith, who each had two safeties in the game. Driving in a run each were Wade, Goforth, Gratton and McGowen.

On Wednesday, April 3, the Knights were in Centralia to take on the Orphans in another non-conference game. In that contest, Triad banged out 11 hits on the way to a 10-0 short-game victory.

Goforth paced the Triad attack with a 2-for-3 day that included a run scored, two doubles and three RBIs. Contributing two hits, three runs scored and a run batted in was Gratton. Coming up with a hit and two runs batted in was Tonn.

Wade chipped in with two hits, two runs scored and an RBI.

Two Triad pitchers, McGowen and Chris Bridges, combined to blank the Orphans on three hits. McGowen started and worked the first four innings, allowing no runs on three hits and a walk. He fanned four Centralia hitters. Bridges threw a scoreless fifth inning, striking out one while not allowing a base runner.