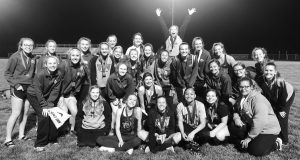 Members of the Triad girls track and field team celebrate after finishing third at the Madison County Meet on Tuesday, April 23 in Troy.

With four Triad entries claiming championships, the Triad girls track and field team finsihed third at the Madison County Championship, which was held on Tuesday, April 23 at Triad.

Alton was the team champion with 167 points. Edwardsville followed with 145 tallies, while the Lady Knights had 110 points. Rounding out the field was Highland (63), Granite City (40) and Collinsville 23.

“The Madison County Championship brings together the 2A and 3A schools from the County,” Triad Coach Katy Rahar said. “As a 2A school, it is sometimes difficult to feel like we can keep up with our larger surrounding schools, but on this night we looked great.”

Garnering individual firsts for the Lady Knights were Denise D’Antonio in the triple jump with a distance of 34-5.5 and Faith Grapperhuas in the high jump with a height of 5-3.

Grapperhaus was scratch from her last attempt at 5-4 because she had to compete in a relay event. She is now second on the all-time Triad list in the high jump.

“Denise D’Antonio has been just shy of her PR since the outdoor season started,” Rahar said. “But she is putting in the work to get back up to that state qualifying mark.”

Triad’s 4 x 200-meter and 4 x 800-meter relay teams also registered firsts for the host squad. In the 4 x 200-meter race, the quartet of Grapperhaus, Savannah Viviano, Bailey Grigg and Kyleigh Barton won their race with a time of 1:48.7. They are currently 15th in the IHSA Class 2A.

In the 4 x 800-meter race, the foursome of Sydney Hartoin, Haley Jackson, Samantha Kilzer and Alyssa Kowalski beat the competition with a time of 10:05.16. They are ranked eighth among the state’s Class 2A 4 x 800 relay teams.

Triad got two individual second-place performances. Lilly Cawvey was second to Grapperhaus in the high jump with a  height of 5-0, while Morgan Noyes was second in the pole vault by clearing 8-6. Cawvey’s leap places her fifth on the Triad all-time list in the high jump.

Two Triad teams also had seconds for the Knights. The group of Grapperhaus, Alexa Seger, Isabel Averill and Barton were the runners-up in the 4 x 100-meter relay. They clocked in at 51.02 seconds. In the 4 x 400-meter race, a Triad team of Hartoin, Kayla Edwards, Jackson and Kowalski was second with a time of 4:17.09.

Earning a third for the Lady Knights was D’Antonio in the long jump with a mark of 16-2. Other Triad thirds went to Krista Cochran in the shot put with a toss of 37-6 and Hartoin in the 400-meter dash with a time of 1:02.13.

“With many medals and PRs at this meet, it made this coach proud of everything the girls have accomplished this season already and very excited for the last few meets leading up to the IHSA state meet,” Rahar said.

Previously, the girls team finished second in a 13-team meet at Chatham Glenwood on April 18.

Triad had two champions at the Chatham competition. D’Antonio was first in the long jump with a leap of 16-1.5. The other first came from the 4 x 200-meter relay team of Grapperhaus, Viviano, Grigg and Barton, who finished with a time of 1:51.80.

The other second came in the 4 x 400-meter relay, where the group of Hartoin, Edwards,Jackson and Kowalski clocked in at 4:22.71.

Triad’s only third at Chatham was posted by the 4 x 800-meter relay team of Hartoin, Jackson, Kilzer and Kowalski. That foursome ran a combined time of 10:31.13.

Fifths by the Lady Knights included a discus throw of 88-6 by Caleigh Miller and a height of 4-8 by Grapperhaus in the high jump.

Bulldogs Fall By Eight To Edwardsville