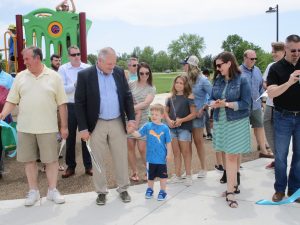 The sun was out. The sky was deep blue. The weather was cool and children were playing on the new swings and slides. It was a beautiful day for a ribbon-cutting.

After being delayed twice due to the threat of rain, Phase II of Glen Carbon’s Schon Park officially opened to the public on Sunday, May 5.

“It is indeed a wonderful day,” said Mayor Rob Jackstadt, addressing a small group of trustees, notables and parents who had come to take their children to play on the new equipment and were surprised by the special occasion.

Where once had been grassy spaces at the time of the ground-breaking a year ago now stand restrooms (“comfort stations,” Jackstadt said) with changing stations in each one, a playset, swings and slides.

“This is a $1.8 million project,” Jackstadt said. “I can thank the taxpayers of Glen Carbon for making this happen. We’re the ones that are paying for this substantially.”

He especially thanked the Junior Service Club of Edwardsville/Glen Carbon for their donation of $40,000. Their current president, Sarah Dawson, addressing the crowd, said, “It’s an honor to be part of this.”

The mayor pointed out the solar panels that are generating electricity for the park and will provide some relief for future growth.

“What this is all about is the future,” he said. “And I’m glad to see so many kids out here.”

He brought his grandson, Wesley, to cut the ribbon.

“This is definitely a step forward,” Harris said later. “Eventually we’ll put in a pickleball and tennis court and basketball in that area then back here there’s going to be a baseball diamond.”

That will happen over the next couple of years, the mayor said later. “It’s going to take some funding to get that available, which typically will be from the state of Illinois. If he state of Illinois gets a Capital Bill where they’re going to get inject funds marked for parks, that will increase our chances of doing it sooner than later,” he said.

After the ribbon was cut, Short and the trustees walked over to a group of shovels in the corner of the park near the street and planted a black gum sapling  as part of the village’s annual Arbor Day observance.

Closely related to the tupelo tree of southern swamps, black gum bears red leaves and little blue berries in the fall. “It’s native to the area,” said Cathy Hicks, head of the G.L.E.N. (Gardening, Landscaping Enhancing Nature) Committee. “It’s something that we don’t have here, so there’s a little bit more diversity in trees because we know if one tree gets hit with some sort of borer, then we lose them all.

“So we decided to be different here on the corner so we went with the black gum,” she said.

The mayor read a proclamation  declaring the day as Arbor Day in the village of Glen Carbon. In the distance, the parents and children continued to enjoy the swings and slides.

The playground equipment has been available for two weeks and has already been drawing families from the area.

This was the first time at the park for Kaitlyn Schmidt of Edwardsville. “We were driving by every day to take our daughter to day care at St. Thomas and we watched it get built. And today’s my birthday, so my husband suggested that we have a picnic at the newly opened park.

“And it’s been a lovely day. Couldn’t ask for a better day for a picnic. And my daughter seems to be loving the playground equipment,” she said.

Her husband, Nathan Mikeska, was helping her daughter, Oriana Mikeska, 3, enjoy the swings.

“We’ll definitely be back,” Schmidt said. “Since this is so close to her day care I see us coming after school quite a bit.”

“I’m very happy to have this accomplished,” the mayor said  later as he left for the day. “It’s been a long time coming.”

Masks and Vaccines Strongly Encouraged, But Not Required At Triad Schools