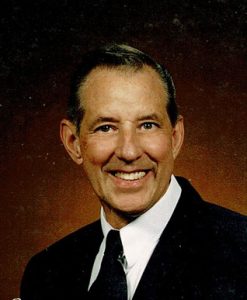 He was born on September 9, 1941 in Decatur, IL to Lewis Nihiser Jr. and A. Maxine (nee Rich) Nihiser Oberdalhoff He grew up in Pocahontas and graduated from Highland High School in 1959.  Before and after graduation he worked at Neubauer’s Meat Market in Highland.  On August 4, 1963 he married Marilyn Jean Tensmeyer at Immanuel United Church of Christ in Carlyle. After marriage Marilyn and Don built their home in the Klaus Lake area where they raised their two sons, Todd and Terry.

While growing up Don was active in the Boy Scouts.  As a young married adult he was an Explorer Post Adviser for Post 43.  He also was a VFW and American Legion member.  He was baptized at Pocahontas Methodist Church; he was raised, confirmed, and became a member of First Congregational Church of Highland, first attending at the age of 12.

In 1966 Don was drafted and proud to serve in the US Army and served in Vietnam in the Big Red One, First Infantry Artillery during the TET Offensive.  While there he earned the Army medals including two Bronze Stars for his combat duty there.  When Don returned back home from Vietnam, Don and Marilyn purchased Troy Frozen Foods in Troy and work the rest of their married life in that business.  Troy Frozen Foods is a member of the Illinois Meat Processing Association, where Don was President in 2004 and also a member of the national association, American Meat Processors.  Troy Frozen Foods has been selected by the National Beef Council as a processing facility in the Midwest for demonstrations in the St. Louis area.  It became HACCP Certified in 2000 as a Federally Inspected Meat Plant.

Don was a hard worker and loved to bowl, camp, water ski and canoe with his family.  He loved his home of 56 years.  As his PSP progressed, he loved being home, putting puzzles together and watching birds.  After 12 weeks of hospitalization in three different hospitals, he was ready for being discharged to go home on Monday, May 13.

Memorials may be made to First Congregational Church, to the family for a bench at Veterans Honor Parkway, to research PSP or donors choice.  Online expressions of sympathy may be made at www.Richesonfh.com

Funeral services will be held at 11 a.m. on Monday, May 20, at First Congregational Church, Highland with Rev. Rick Cook officiating. Interment with full military honors will be in Carlyle City Cemetery with a luncheon to follow at the Tensmeyer Farmhouse, 13535 Hughes Road, Carlyle.

Richeson Funeral Home was in charge of arrangements.