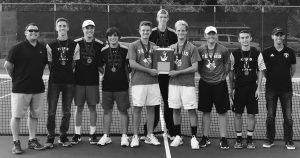 For the third year in a row, the Triad tennis Knights won the Mississippi Valley Conference Tournament, this time doing so without drama, sweeping all three doubles flights and all six singles flights in the process. It is the first time since Triad accomplished the feat in 2010 that a school has swept all nine flights at the conference tournament.

“I’m proud of these guys and the efforts they have made this year,” Triad Coach Jack Carmody said. “When you graduate nine of your top 13 guys and then lose a kid as talented as Ben Veteto for a total of 10 of 13, you tend to drop off a bit; but these guys have pushed themselves to achieve great things, including a sweep of all nine flights in the MVC Conference Tournament. A MVC Conference sweep has not happened since the 2010 Knights did it almost a decade ago.”

The Tournament began on Friday, May 10 with doubles play at Triad.

In the top flight of doubles, the Triad duo of Jaden Henderson and Sean Froidcouer defeated a Highland team of Dylan Bargetzi and Allen Sutherland 6-1, 6-1 in the championship match. Previously, Henderson and Froidcouer downed Jerseyville’s Spencer Bryant and Brett Stackpole 6-1, 6-0 in a semifinal match.

At number two doubles, Triad’s entry of T.J. Bloom and Jared Speer defeated Waterloo’s Greg Nodorft and Jeremy Zeidler 6-2, 6-2 in their championship bout. Bloom and Speer were 6-1, 7-6 winners over a Mascoutah duet of Cal McCollum and Dylan Lercher in a semifinal contest.

Winning at number three doubles for Triad was the combo of Kellan Collins and Cam Woods, who defeated Waterloo’s Blake Reisner and Garrett Nordorft 4-6, 7-5, 6-4 in a championship match. Collins and Woods beat a Jerseyville team 6-2, 6-4 in their semifinal match.

“The path to the Championship Sweep was not without a struggle,  like our number three doubles grinding to make it happen in the finals,” Carmody said. “Give credit to all four competitors, but the Knights’ Kellan Collins and Cam Woods dug deep and got it done.”

After rain postponed the singles portion of the tournament on Saturday, May 11, the event  concluded on Monday, May 13.

On the final day of the tournament, Henderson won the number one singles flight by beating Cam Pavelschak of Mascoutah 6-7 (5), 6-1, 6-0 in the championship match. Earlier, Henderson defeated Dylan Bargetzi of Highland 6-0, 6-1 in  a semifinal clash.

At number two singles, Froidcouer beat Sutherland Allen of Highland 6-4, 3-6, 6-1 in a championship contest. Froidcouer was a 6-2, 6-1 winner over Stackpole in a semifinal confrontation.

Speer won the number three flight for the Knights, topping Waterloo’s Greg Nordorft 6-1, 6-1 in the final. Speer claimed a 6-0, 6-0 triumphant over Highland’s Conner Barton  in a semifinal showdown.

Ethan Corlew was the champion in the number four flight, upending Lercher of Highland 6-1, 6-3 in the final. In his semifinal match, Corlew defeated Will Roberts of Jerseyville 6-7 (5), 6-2, 7-5.

Taking the number five singles for Triad was Bloom, who beat Jack Norrenberns of Mascoutah 7-5, 6-0 in his championship match. At the semifinal level, Bloom was a 6-0, 6-0 winner over Garrett Smith of Waterloo.

Completing the sweep for the Knights was Kyle Langenstein, who overcame Eddie Roberts of Jerseyville 7-6, 4-6, 6-1 in the number six singles championship. Langenstein defeated Tommy Beck of Mascoutah 6-3, 6-1 in a semifinal bout.

“Ethan Corlew at number four singles was down 5-2 in the third set, but a never say die attitude allowed him an opportunity to mount a comeback and win 7-5,” Carmody noted.  “Jaden Henderson at number one singles recovered from a first set loss in a tiebreak to rally and win easily 6-0, 6-1.  Kyle Langenstein at number six  singles fought back after losing the second set, took his game to the next level and won the third 6-1.”

The Knights followed their conference title with a sectional title on Friday, May 17 in Troy.

Triad finished the sectional with 29 team points, 13 more than the second-place Mascoutah squad. Alton Marquette (12), Highland (11) and Jerseyville (10) rounded out the top five.

“This is the third sectional title in a row for the Knights,” Carmody said. “No other team in Triad history has accomplished this feat. I’m really proud of these guys for their efforts, and the fact that we clinched the sectional title on Friday night, the first ever for the guy’s team.”

Henderson was the sectional singles champion, beating Cameron Pavelschak of Mascoutah 6-3, 7-5 in the championship game.

“Jaden Henderson, only a sophomore, is the first MVC tournament champion and sectional champion since 2008,” Carmody noted.

Henderson will advance to the state tournament, along with the Triad doubles teams of Froidcouer and Woods and Bloom and Speer.

Froidcouer and Woods finished second in the tournament, falling to the Alton Marquette team of Daniel McClosky and A.J. Bower 6-0, 6-1 in the doubles title match. In their semifinal match, Froidcouer and Woods defeated Jerseyville’s Bryant and Stackpole 6-2, 6-1.

Bloom and Speer finished third in doubles, beating Bryant and Stackpole in their final match of the tournament.

“Cameron, Jared, and TJ have all made huge strides this year as neither of them made an impact on last year’s varsity squad, so for them to go from where they were then to where they are now is a testament to their work ethic, drive, and passion for the game.”