Stunned by a first-inning ambushed and unable to generate any offense against their pitching foe, the Triad Lady Knights dropped a 6-0 regional championship game to the Freeburg Midgets on Friday, May 24 in Bethalto. The loss ends Triad season with a 23-8 record.

Freeburg sent eight hitters to the plate in the first inning, collecting five runs on six hits and putting the Lady Knights back on their heels.

Kelsie Burrows started what proved to be the winning rally with a double to right center. She advanced to third on a infield hit by Chloe Schanuel, who quickly stole second base. An out later, a single by Colleen Cockrell plated Burrows and Schanuel. The inning continued with a infield hit by Chasity Hill. Another safety by Lizzy Ludwig loaded the bases for Jessica Poirot, who drove in two runners with a single to right. A third runner scored when Poirot was thrown out trying to stretch her single into a double, but Ludwig scored on the play before the final out of the frame was recorded.

An offensive juggernaut for most of the year, Triad could do nothing with the offerings of Ludwig, who shut the Lady Knights out on just four. She went the distance, fanning four and walking no one.

Of the Knights’ four hits, three belonged to Caroline Lehan, who singled in each of her plate appearances. The other Triad hit came off the bat of Jenna Bohnenstiehl, who also had a single in the game.

Triad starter Liz Young rebounded from her rough start by limiting the Midgets to just one run on four hits after the first inning. She was charged with six runs on 10 hits and no walks. Young struck out six Freeburg hitters.

Freeburg’s final run came in the fifth inning when Hill drove in Carly Otten with a double to left-center field.

The regional final was the third meeting of the year between Freeburg and Triad. On March 16, the two teams split a doubleheader, with Triad winning a 3-2 opener before dropping a 12-10 verdict in the nightcap. In their win over Freeburg, Young struck out 11 Freeburg hitters and walked one in a game where she allowed two unearned runs.

Ludwig was the loser in that contest, giving up two earned runs on eight hits and a walk.

The Midgets (16-11) were scheduled to face Carbondale in a sectional semifinal match on Wednesday, May 29 at the Carterville sectional.

Against a foe that beat them twice in the regular season, Triad struck for two runs in the third inning and three more in the fourth and made those tallies hold up.

The Eagles, however, drew first blood, scoring an unearned run in the second inning, as Triad committed two errors in the frame.

The Lady Knights took the lead 2-1 in the third inning when Bohnenstiehl sacrificed a run home ahead of an RBI single by Payton Bode. Earlier in the inning, Ella Moore doubled and Kailey Daniel singled to set the table for Bohnenstiehl and Bode.

Triad made it a 5-1 contest in the fourth when Shiane Taylor, Moore and Daniel all had RBI safeties.

A two-run homer by Gracie Braun in the sixth drew the Eagles within two runs of the Lady Knights, but CM could get no closer.

Young, who was the losing pitcher in a 9-6 decision against Civic Memorial on April 8 and in a 10-3 verdict against the Eagles on May 15, got the better of her nemesis on the third try. Young went the distance, giving up two earned runs on five hits and a walk. She fanned seven Eagle hitters.

Moore finished the evening with a pair of doubles, two runs scored and an RBI. Also garnering two safeties and an RBI for Triad were Taylor and Daniel. They each also scored a run. Adding a hit each for the Lady Knights were Lehan, Dallas Zirkelbach and Young.

Kaitlyn Wrenn was the startling and losing pitcher for Civic Memorial. She was relieved in the fourth by Braun. 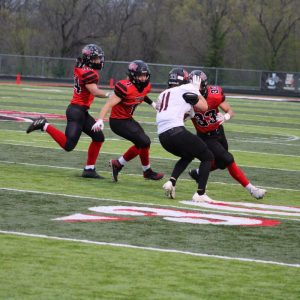