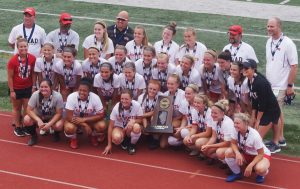 The Triad Lady Soccer Knights pose with the plaque noting their third place win this past weekend in the IHSA Class 2A Tournament. Photo by Al Ortbals

The Triad Knights Girls Soccer team came home Saturday with a third place win, ending their final game of the season with a 3-1 win over Joliet’s Catholic Academy in the IHSA Class 2A Tournament. Games were played at North Central College in Naperville.

There was considerable excitement going into Friday’s game against Benet Academy from Lisle, after having won the supersectionals and with a chance at the state title.

Varsity Soccer Coach Matt Bettlach described the 1-3 defeat Friday against Benet as a “heartbreaker of a loss” for many on the team, but said they were determined to pick up the pieces and make their last one a good one.

One thing that really hurt them was a fluke penalty that gave Benet a chance to tip the scales, which they made good on.

“The other team got a penalty kick in the last 10 minutes of the game, and it cost us,” Bettlach said.

Benet scored their first goal 39 minutes into the first half, coming back in the second to score two more at the 69 and 74 minute marks. Triad’s #18, Avery Bohnestiehl, locked in Triad’s goal at 48 minutes into the second half, unassisted.  Abbey Counts had three saves.

Against Catholic Academy, Triad was on their game, securing the ball and playing well

“We were all over them,” Bettlach said. “It was a great last game of the year.”

Both teams found the net in the first half with one goal each. Joliet scoring first about 3/4 quarters of the way through, followed by an unassisted goal by Lydia Smith of Triad five minutes later.

Triad came back in the second half with a successful penalty kick by Katie Rogers, and a second unassisted goal by Lydia Smith. Abbey County got credit for three saves.

“We have so much depth in our team,” Bettlach said. “We never missed a beat.”