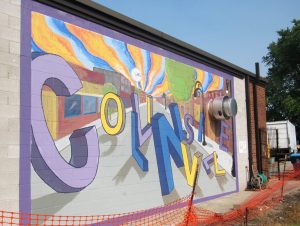 The Collinsville Township Senior Center at 420 E. Main St., received a facelift with a large-scale mural on one of their side walls. The mural, designed by an SIUE student, was painted by other SIUE art students.

Graffiti on the senior center wall got Director April Hausman thinking there must be a way to deter the vandalism. After some research, she contacted head of the painting program at SIUE, Jane

Barrow, to see if a student artist would be interested in creating a large-scale mural to cover the west- facing wall of the building. The response from Barrow was positive and she put Hausman in contact with student Sutton Allen. Allen is a senior at SIUE and President of the Painting and Drawing Association at SIUE.

After concepts on the mural were presented to the Collinsville Township Board of Trustees, it was presented to the City of Collinsville Planning and Zoning Committee. The committee said it was the “exact direction that the city is wanting to take in the uptown area.” The mural was finished last week and took only a week to do. Five to six students worked on the mural day-to-day, and worked “super long days, sometimes noon to sundown” Hausman said. The project started on May 15 and the students finished the mural on May 23.

“It looks even more interesting than the computer version. It looks very neat on such a grand scale,” Hausman said. “They picked a good color palette for the mural.”

The mural is the colorful finish to the renovation and updates to the interior of the building that’s been underway since January. An open house is being planned to encourage visitors to see the updates and learn about the center’s new programming.

To learn more about the Collinsville Township Senior Center call (618) 344-7787 for more information.