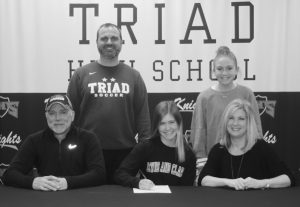 Triad soccer standout Chelsa Riden recently signed a national letter of intent to attend Lewis and Clark Community College in Godfrey and play for the Trailblazers.

As a junior, Riden had nine goals and two assists.

“Chelsea has the speed and the soccer touch; the 1-2 touch, the good technical ability,” Triad Coach Matt Bettlach said. “She can score. She can get the ball in the back of the net. She’s good with the ball and she’s fast.”

Heading into this year’s  state tournament, Riden had six goals, including two game winners, to go along with four assists. In 2018, she scored nine goals and distributed two assists. As a sophomore in 2017, Riden had four golas and three assists.

Riden will be joining a LCCC team that won the National Junior College Athletic Association (NJCAA) District 24 title during the 2018 season. The Trailblazers finished the year with an appearance at the national tournament and a 19-1 record.

Lewis and Clark is coached by Tim Rooney.

Chelsea is the daughter of Steve and Stephanie Riden.