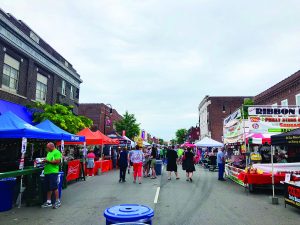 Visitors at the International Horseradish Festival in Collinsville check out the many vendors and food options available. Photo by Emily Klein

Cloudy skies and chance of rain didn’t stop big crowds from attending the International Horseradish Festival on Saturday, June 8 in downtown Collinsville. The event ran from Friday, June 7 to Saturday, June 8 and had food and drink horseradish-related, plus many contests and activities.

The 32 annual International Horseradish Festival brought in visitors of all ages despite iffy weather, but the overcast skies brought temperatures that made it cool enough to be outside all afternoon.

Attendees milled throughout the festival eating food from various vendors and listening to live music.

Many of the vendors had foods with horseradish incorporated in the dish, like the horseradish bratwursts from Randy’s House of Bar-B-Que. Many vendors had non-alcoholic drinks like lemonade and sweet tea, or attendees could buy a few drink tokens to order a deluxe bloody mary or various beers. The cocktail is made with a choice of pepper or bacon vodka, and the deluxe comes with two shots instead of one. On top of the drink, it comes with all the fixings including a lime, hot pepper, and beef jerky stick.

Aside from food and drink, visitors with children could head over to the carnival games where they could win prizes. There was also a bungee jump, rock climbing, and dunk booth for the more daring.

Little Miss and Mister Horseradish Pageant returned this year, and there was a new car show with prizes as well. The 5K run made a comeback, too, and with a plethora of new activities the Collinsville Chamber of Commerce expected big crowds this year.

“We’re hoping for crowds up to 25,000,” said chairman of the festival, Dianne Riley. The festival was moved last year from Woodlands Park to downtown Collinsville because the festival was “at a part where we couldn’t grow at the park anymore,” Riley said.

The blocks for the festival held over 18 food vendors, live entertainment, craft booths and more.

The chamber was nervous about the switch to downtown last year, but it went over very well and they decided to keep the location for this year. The festival also had two city busses working as free shuttles that transported people from their cars at Dorris Intermediate School to the festival.

Around noon, the festival experienced a light rainstorm. Many visitors took shelter in local shops like Verona Coffee Company and Monster Records until the rain let up around 20 minutes after it started.

The rain allowed the temperature to stay cool, which many attendees said they enjoyed.

The Horseradish Festival blocked off sidewalks and streets from Hwy 159 to Seminary Street.

The festival is always the first weekend of June, and has free attendance. To find out more information, visit www.internationalhorseradishfestival.com.