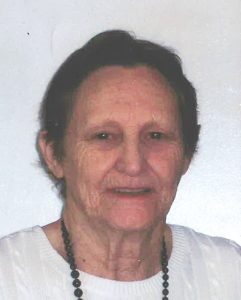 Betty Ann (Pekar) West 87, of Caseyville, formerly of Troy, passed away on Thursday, June 13, 2019 at Caseyville Nursing and Rehabilitation Center.

Mrs. West was a member of the Royal Neighbors and active with the area Red Cross. She was also a member of St. Michael’s Episcopal Church in O’Fallon.

She is survived by her children, Tod West Jr. of Dardenne Prairie, Missouri and her daughter, Marge (Richard) Saia of Troy; grandchildren, Scott Alan West, Jonathon Michael and Stephen Alan Saia; and sister-in-laws, Margaret Pekar of Texas, Barbara West of Troy, and Shirley Pekar of Colorado.

Memorial donations may be made to Caseyville Nursing Home and Rehabilitation

Center or to VITAS Hospice. Additional condolences may be sent to the family at www.herrfuneral.com.

A memorial visitation for Betty will be held on Wednesday, June 19 from 9 a.m. – 11 a.m. at Sunset Hill Funeral Home.

Following the visitation, inurnment will be held at Sunset Hill Memorial Gardens.