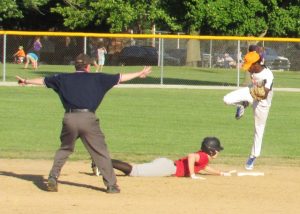 A player on the Troy 2 team makes it back to second, barely, in MERBL action against East St. Louis last week in Troy.

Teams in the Metro East Recreational Baseball League High School Division managed to get in several games this past week, in between a number of rainouts and reschedules.

As of June 20, the Maryville M2 American League team improved onto the lead it had on June 13, which was 4 wins and 0 losses, continuing with two more wins to make it 6 and 0.

The Collinsville C6 team also continued its run, with 4 wins and 0 losses as of June 20.

Games are scheduled to continue through July 21, with a special annual Senior All Star Game set for June 28 at 6 p.m. This year’s game will be played on the George Lanxon Field at Moody Park in Fairview Heights.

Standings in the American League as of June 20 were as follows:

Standings in the National League as of June 20 were as follows: