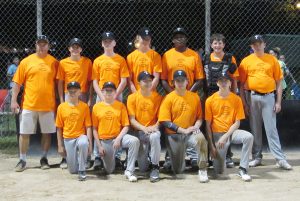 The newly crowned champions posing for a picture following their victory.

Even a last minute field change could not stop the young Troy team, who go by the name Huskies, from winning their second league championship in as many years. The championship was originally planned to be played in Troy, but a rain shower on game day forced the contest to move to another venue, which was Collinsville’s Jaycee Sports Park.

Their opponents hailed from Fairview Heights and were coached by Ed Mullenschlader. Fairview Heights possessed a 7-2 record from the regular season and entered the playoffs as the 3 seed before finding their way to the championship.

Troy held a perfect 9-0 record at the end of the regular season as well as the 1 seed in the playoffs before arriving to the championship bout. Sam Drake led Troy as their head coach, and Jason Raffaelle was the assistant coach. Troy was also the previous year’s champions following an undefeated season that year as well.

As per usual for the league championship game, the time limit was removed and a full 7 innings were to be played.The Huskies came out to play and brought both their offense and defense to defend their title. They started the game off strong and never looked back as they won by an astounding score of 11-0 thanks to both offensive and defensive domination.