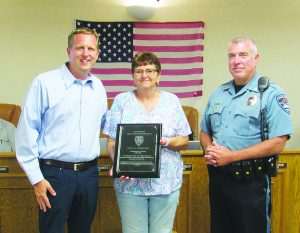 Donna Markovich, center, is recognized at the city council meeting on Monday for her years of service after retiring as a telecommunicator for Troy. L-R: Troy Mayor Al Adomite, Donna Markovich, Troy Police Chief Brad Parsons. (Photo by S. Rensberry)

An update on the project was provided by City Administrator Jeff Soland at the July 15 meeting of the Troy City Council .

“Things are going according to plan,” Soland said.

Mayor Al Adomite noted that the closure, which will apply specifically to several hundred feet of Spring Valley Road going south from U.S. 40., will likely increase the volume of traffic using Kirsch Road, Formosa Road, and other alternative routes out of the subdivisions along Spring Valley Road.

Aldermen approved a Table Organizational Change related to the Troy Police Department, as well as agreed to direct the Board of Police Commissioners to promote two officers to lieutenant, with each being in a supervisory role over their respective squads.

Under the new organizational chart, the position of assistant chief would become permanent and the next in line would have to be chose from the pool of lieutenants, Troy Police Chief Brad Parsons said, while the rank of captain will be eliminated. Union rules restrict what two union officers can do in disciplinary cases, so in that case it would fall to the assistant chief, Parsons said.

The change comes with the full recommendation of the Law Enforcement and Emergency Services Committee, and is not expected to impact the current police budget because of the recent retiring of one officer, and the resignation of another.

The position of assistant chief was established approximately two years ago, with Brent Shownes promoted to the position, with the understanding that it would be reviewed after a couple of years. The council’s action on Monday makes it official.

Due to the death of Jay Evans, who was chairman of the Zoning Board of Appeals, Adomite said they were left with a vacancy that needed to be filled.

Adomite said he had asked former alderman Dan Jackson, who agreed to serve on the committee. The board generally meets only 1-2 times per year, he said.

A special presentation and plaque was given in honor of retiring telecommunicator Donna Markovich, after serving with the Troy PD for approximately 19 years, and others before that. Donna’s husband, Michael, was present, as were several family members.

Adomite gave an update on plans for a splash pad at Tri-Township Park and said a change to the lease the city already has with the park for a nearby piece of property would need to be modified to include the splash pad area. A graphic produced by Oats Associates was included with Monday’s agenda, showing the planned splash pad area just south of the existing lease area and surrounding the existing skate park.

A motion to hire Frank Ratay as a crew members in the Public Works Department was approved, effective August 5. He will start at an hourly rate of $22.13/hour.

A motion to accept a preliminary plat for Hampton Glen Estates, Phases 4-6, was approved by unanimous vote. The area cited in the resolution is located at the corner of Troy O’Fallon Road and Country Lane.