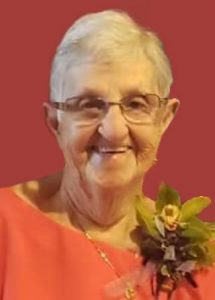 She was born on Saturday, July 6, 1929, in Pocahontas, the daughter of  Fritz and Irma (nee Knebel) Pfister.

Lou was born at Pocahontas, on the family farm and grew up attending Millersburg County School.  Following marriage, they moved to Highland and she worked at Moulton-Bartley Shoe Factory and later for Basler Electric in 1950 and retired in 1994.  Six months later she started at Highland Wal-Mart as a greeter.  She celebrated 25 years at Wal-Mart in July of 2019.  She enjoyed crafts – coasters, greeting cards and had an annual craft show at her home.  She liked to visit flea markets and thrift stores.  She enjoyed going out to eat.  She loved penguins and collected them.

Visitation was scheduled from 4-8 p.m. on Wednesday, August 7, at Spengel-Boulanger Funeral Home in Highland..

Funeral services were schedule from  8 p.m. on Wednesday, August 7, at the funeral home.

The funeral procession will leave the funeral home Thursday, August 8 at 11: a.m. for a Graveside Service at the Highland City Cemetery in Highland.

Interment will be at Highland City Cemetery, Highland.

Memorial contributions may be made to Hoyleton Youth and Family Services or Hospice of Southern Illinois.