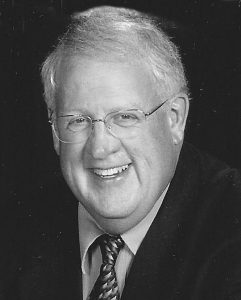 A retired science teacher from the Edwardsville School District, Chris was famous for his water displacement experiment during which he would stick his head in a bucket of water to the amusement of his students and fellow teachers.

He was a very active member of his church community, volunteering in many different roles.

Chris possessed a great sense of humor and easily made deep, meaningful connections, leading him to be a friend to many. He loved being in nature and passed this love on to his children by serving as a leader in the Girl Scouts and Boy Scouts organizations for many years.

He was an avid traveler and visited many places around the world. Chris’s enjoyment of taking pictures (an understatement) is seen in the thousands of photographs he took throughout his life during every possible moment. He loved to read and was a science fiction buff.

Chris is survived by his beloved wife, Debra (Hanson) Zimmer, whom he married on September 16, 2000. A wonderful father, he is also survived by his children: Valerie Zimmer of Chicago, Rachel (Zimmer) Martin and husband Jacob of Scotts Valley, California, Megan Zimmer of Bridgeport, Connecticut, Lenore (Zimmer) Herndon and husband Samuel of Jackson, Missouri, Douglas Zimmer and wife Holly (Waidanz) of Lisle, Adam Bohnenstiehl and wife LeAnn (Doss) of Marine and Aaron Bohnenstiehl and wife Sherrie Ann (Massie) of Tarpon Springs, Florida. He delighted in being the grandfather to six boys and two girls. Chris is also survived by his nieces, nephews, and cousins.

He was preceded in death by his parents, Frank J. Zimmer Jr. and Gladys C. (Suessdorf) Zimmer; and by his brother, Lee B. Zimmer.

Funeral services were held  on Monday, August 12 at St. Paul United Church of Christ in Lebanon.

Immediately following the service, a luncheon was held in the church’s Fellowship Hall followed by internment at Sunset Hill Memorial Estates in Glen Carbon.

In lieu of flowers, memorials in memory of Chris may be made to St. Paul United Church of Christ.

Online condolences may be expressed at weberfuneralhome.com.

Weber & Rodney Funeral Home in Edwardsville was in charge of the arrangements.