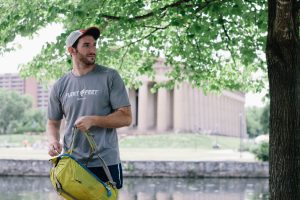 Runner Steve Young is expected to arrive in Troy for the Bradley R. Smith 5K Run on September 7.

For the past three months now, Steve Young has been making his way, step-by-step, toward Troy, where, on Sept. 7, he plans to participate in the Bradley R. Smith 5K Memorial Run/Walk.

His trek across American began three months ago in San Francisco, and since then he has been running eastward at a rate of 30 to 40 miles a day.

New York is the final destination

His final destination is New York, but before then he’ll detour to Troy to help raise money that goes toward more than two dozen scholarships for high school students in the area.

“I was looking at the time frame, and I was either going to go north to Chicago or stray a little bit south and make it for the 5K and I said ‘Okay, I’m not going to miss that.”

Young and Smith both served in the United States Air Force Tactical Air Control Party. Brad Smith was raised in Troy, graduated from Triad High School, and graduated from Air Force basic training in 2006. During a mission in Afghanistan in January of 2010, he and a platoon medic were killed by an IED as Smith tried valiantly to help colleagues who had come under enemy fire. He was awarded the Silver Star for valor on Sept. 8, 2012. Other awards include the Purple Heart, the Air Force Commendation Medal and a host of others.

Young grew up in Louisville, Ky. Five years ago he and other members of his unit traveled up to Troy to participate Bradley R. Smith 5K. The event usually draws 700 to 800 runners and recently has raised about $300,000 for scholarships, says Gary Smith, Brad’s father. The scholarships are awarded not only to Triad High School students but to students at Collinsville, O’Fallon and other area high schools.

“A lot of people have benefited,” Gary Smith said.

Steve Young began his running journey in San Francisco. By Saturday afternoon he had made it to Kansas City, Mo. It’s his first attempt at a cross-country run though he has been running ultra-marathons since his sophomore year at the University of Kentucky. Since then he has finished several 50-and 100-mile races. A few years back, while on active duty for the Air Force, he made a trip to Colorado and found time during a long weekend off to complete a 100-mile run.

Young says the most difficult leg of the journey was through North Central Nevada, where there were “long stretches of 80 to 90 miles between towns.” He journey also took him through several national parks, including Yosemite and Rocky Mountain National Park. Then there was Mt. Evans, which has the highest elevation road in North America.

In addition to helping with the Troy fundraiser, Young has also been raising money for the National Parks Foundation, the official non-profit arm of the U.S. National Park Service. “They do a lot of cleanup and conservation work projects for all 144 of our national parks,” he added.

In Troy, many volunteers have donated time to help ensure that the Bradley R. Smith Annual 5k Walk/Run is a success, including the Troy VFW, the city of Troy, and the Troy Chamber of Commerce, Gary Smith said.

In addition to raising scholarship money, Smith said the event serves as a reminder not only his son but of other military veterans as well as police officers and other first responders.

More information about the Bradley R. Smith Memorial Scholarship Fund and Annual 5K Run can be found at www.runforbrad.org.