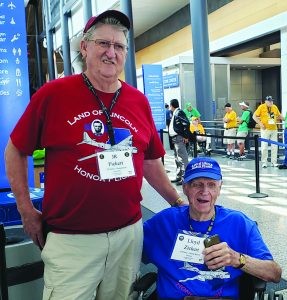 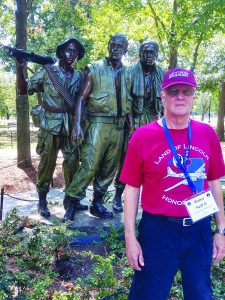 Walter Neff of Troy is shown during an Honor Flight trip to D.C.

By Steve Rensberry and Charles Feldman

Two local residents and veterans Walter Neff and James Fickert, both of Troy, returned from an honor flight on Aug. 20 after participating in the memorable adventure along with several others veterans in the state.

Neff recently shared his thoughts about the experience, and his appreciation for those who arranged it and the reception they received upon returning home.

“The trip was great,” Neff said.

It was definitely a well-organized and memorable experience.

Neff said that even though their plane was 3 hours late arriving back in Springfield, a very large crowd of people was waiting to great them.

“It seemed like half the town of Springfield had turned out to welcome us home,” Neff stated in an Aug. 24 letter to Land of Lincoln Honor Flight, Inc., which organized the flight. “They thanked us, shook our hands, smiled at us. It was a truly moving experience. That outpouring of goodwill was the real highlight of the trip.”

Although born in Springfield, Illinois, his parents moved to St. Louis where he graduated from high school in 1966. he signed up for military service right after graduation and eventually ending up working as a special agent for the U.S. Air Force Office of Special Investigation, Department of Defense Office of Inspector General.

He retired on Jan. 1, 2000, but was called out of retirement for a period of time right after 9/11, for his computer forensic skills. His earlier military service included time in Texas, the Azores Islands, Thailand, Florida, Tennessee, and Vietnam — where he served from 1966-1977. He entered the reserves in 1987.

The Honor Flight began when they left Springfield on a Sun Country Charter Flight, on a Boeing 737. The pilots and crew all donated their time, he said.

Among the places they visited were the WWII Memorial, Korean Memorial, Vietnam Memorial Wall, Arlington National Cemetery, and Air Force Memorial; they also watched the Changing of the Guard.

A letter from Land of Lincoln Honor Flight President Joan M. Bortolon and the executive board thanked those whose donations make such flights possible, and thanked each of the veterans.

“Thank you for your service to our country and protecting our freedom,” Bortolon stated. “Your efforts are truly appreciated. You are a true American hero.”

Neff is married to his wife, Kathy, and lives still lives an active life at 73, enjoying woodworking and other hobbies, as well as participating at the Town and County Gun Club. His birthdate isn’t hard to forget. He was born on Dec. 7 —  Pearl Harbor Day.

Flight Day started early for James R. Fickert – 3 a.m., to be exact – and ended about nine and a half hours later – 12:30 a.m. the following day due to a three-hour delay. There were places to go, war memorials and the Smithsonian National Air and Space Museum to see, memories to be made.

The local U.S. Army veteran  – who lives on Longhi Road in rural Madison County between Collinsville and Troy –  was part of a group taking a special Honor Flight to the nation’s capitol on Tuesday, August 20.

His free day trip was courtesy of the Land of Lincoln hub of the Honor Flight Network.

The network provides free flights and tours for veterans to visit their war memorials and be welcomed by a cheering crowd or salute. Originally started as a way for aging World War II veterans to have a chance to see the World War II memorial constructed in their honor, it has grown over the years to include those who served in the Korean conflict and in Vietnam.

“It was a terrific full day,” he said. “We had a police escort going to all the memorials.

“I think one of the main things that impressed me was on the way to Washington at the airport, all the people who were there to greet for you and clap for you.,” Fickert said. “On the way home it was the same we in Springfield. We were all tired and a little disoriented, but it caused a deep feeling. It really did.”

Accompanying him on the flight, serving as guardian, was his friend Jody Harrison, a former teacher.

“This lady did a top-notch job,” Fickert said. “She had a lot of things to put together along with the honor flight crew. You’ve got to mention her.”

Harrison had a good time as well. “First of all, what an awe-inspiring experience!” she wrote three days later. “I feel privileged and honored to have had the experience to  accompany these veterans to Washington D.C. and to be Randy’s guardian.

“It was first-rate from start to finish and was a complete success despite an almost three hour departure delay from D.C.,” she continued. “I have learned that we have no control over Mother Nature. Thanks to everyone involved that made this #57 flight possible.  What an awesome day for the deserving veterans.

“Thank you also to all the people that stayed until our return, which was after midnight,” she added. “Thanks also to family and friends that made the effort to go to the airport to welcome all the veterans home.”

On the flight was an older gentleman from World War II  who impressed Fickert.

“He had his name tag on,” he said. “His name was [Lloyd] Zickert and my name is Fickert. So we had our picture taken together with the name tags.”

“I was stationed at the missile site which was around Marine, Illinois,” he remembered. “It was one of the St. Louis area defenses. After the Army, I went to work for Shell Oil Company.”

He worked in operations for 12 years, then was in engineering services. He retired in 2006.

His friend Jody had a friend who alerted them to the honor flight and said they needed to sign up for it.

“And that’s how we heard about it,” Fickert said.

“I would encourage any family members or friends who know a veteran to help them to be able to take this Land of Lincoln Honor Flight,” Harrison said. “There is no cost to the veterans. It is a once-in a-lifetime experience.”

For more information about Honor Flights or for an application visit Land of Lincoln Honor Flight on Facebook or go to the web site at www.LandofLincolnHonorFlight.org.