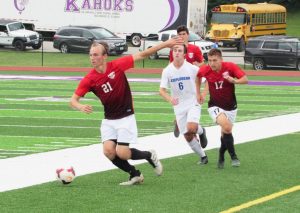 Triad scored two goals within 10 minutes on their way to a 3-0 win at Collinsville Saturday evening in the final game of the Kahok/Redbird Soccer Classic.

“We came out slow, we were flat, it was our third game in just over 24 hours,” said Triad coach Jim Jackson.

“Once we got into it we played really well. We scored a couple of nice goals. The kids worked hard. As the game kept going, we just got better. We really possessed the ball better than we have all week.”

Triad’s Travis Speer netted the first goal with five minutes to play in the first half. Colton Clark had the assist. Michael Tentis began the play on a long throw in.

Five minutes into the second half Roger Weber added to the lead. Tentis picked up the assist.

“It was another flick. Roger had a ball coming across the middle and just skimmed the ball right over his head. It just had eyes you could just see it when it was going in. When he flicked it there was no way the goalie was getting it. He’s playing really well.”

“To get that goal that put us at ease for the victory, but we had to keep the shutout going. We kind of locked it down defensively.”

David DuPont stopped all six shots he faced for his first shutout of the year.

The shutout victory allowed the Knights to finish ahead of Alton Marquette for the tourney based on goal differential. Both Triad and Marquette went 2-0-1 for the tourney. However, Triad gave up three goals, while the Explorers gave up four.

Due to some other games being cancelled because of weather no official tourney title was awarded.

Triad moved to 3-0-1 on the young season. All three victories have come against Southwestern Conference schools. CHS fell to 1-2.

Saturday morning Triad traveled to Alton for their 2nd game in the tournament. They returned with a 3-1 triumph over the host Redbirds.

“I think we hit all three boxes, not 100 percent, but we did improve on them,” said Jackson. “I’d say we played a good 60 minutes, we could’ve played better, but it’s the first couple games of the year and we’re trying to find the right combination; the right subs. Play was better overall, communication was better.”

The game, played at Alton High kicked off at 8 a.m..

“We had to get up at 5 o’clock this morning, travel at 6:15, and play at 8 a.m. at their place. To get a victory, 3-1 against a 3A school and come off a tough game with the weather and everything, I was pleased with the outcome.”

Speer scored for the Knights in the 26th minute to help Triad to a 1-0 advantage at the half. Tentis scored six minutes into the 2nd half to push the Triad advantage to 2-0. He was assisted by Joe Wade.

Alton’s Jake Lombard cut the lead to 2-1 in the 63rd minute, but six minutes later Weber scored on an assist from Ellis to create the final 3-1 margin.

DuPont made seven saves against the Redbirds.

Clark scored two goals a minute apart early in the game, but the Knights could not hold the lead as they finished with a 2-2 tie in the opening game of the tournament at Kahok Stadium in Collinsville.

The game was called off with 5:35 left in second half due to lightning.

“After that our play continued to deteriorate. As a team we need to learn how to handle adversity better and learn to possess the ball out of high pressure. Our goal is to step up and play a full 80 minutes.”

Triad jumped out to a 3-0 lead in the 1st half and held on for a 3-2 victory over Belleville East in the season opener for both clubs.

The match was scheduled to be at Triad, but was moved to East due to wet field conditions.

Ellis, Tentis, and Speer scored the goals for Triad with Speer and Wade picking up assists.

DuPont picked up the win in goal for the Knights.

Triad Wrestles By Roxana And O’Fallon