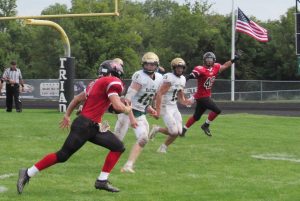 The Triad football season was set to begin last Friday but the weather would decide otherwise. At first, the game start was put under delay with hopes the rain would slow or stop completely. But after about an hour of continuous downpour, the game was officially postponed until 2 p.m. on Saturday.

The next day, everyone returned with a renewed energy. The players came out pumped up with the prospect of a first win ahead of them.

The fans also showed up strong for a postponed game with the student section sporting a tropical theme, which was appropriate considering the previous night’s downpour. Even part of the band came out for the make-up game.

The Knights kicked off to start the game with a booming kick that unfortunately for them, took a bad bounce out of bounds and caused Mattoon to be given great field position.

Another error was made on the next play when the defense was flagged for a horse collar tackle to give their opponents 15 more yards.

After that, the defense stood strong and forced a Mattoon punt to bring the Triad offense onto the field for the first time. Following a drive that went deep into their opponents territory, the Knight’s settled for a field goal to take their first lead of the season at 3-0.

The Knights finished out the rest of the first quarter strong by stopping Mattoon again, completing a 38 yard pass to Anthony LaRue, and arriving near the goal line.

On the first play of the second quarter, Logan Wongler snuck up the middle for the first touchdown of the season. A subsequent PAT was converted by Travis Speer to make the score 10-0.

Mattoon answered back with a touchdown of their own with a 14 yard reception on a forth down play to keep the score close. An extra point made the game 10-7 and was the last time Triad’s defense would surrender a score for the rest of the contest.

Triad responded less than 2 minutes later with a Luke Foreman touchdown run and a two point conversion by Logan Wongler.

After their defense held strong yet again, the Knights scored again with the ball in the hands of Luke Foreman on a 12 yard rush. Yet another successful PAT made the score 25-7. This was the final scoring play before the halftime break.

The home team wasted no time adding to their lead after half time.

Luke Foreman scores his third touchdown of the game on a 16 yard run, which brought out Travis Speer to make his fourth successful kick of the day.

Eventually, the defense forced a punt to get the ball back. The home team added their final points of the game on a Max Skee’s touchdown run paired with a Travis Speer PAT kick.

The clock would run out not long after and leave the Knights with a resounding 41-7 victory. This win ended with the football team’s largest margin of victory since September 15, 2017.

Looking ahead at the rest of the Knight’s schedule, their remaining opponents have a combined record of 4-4. Civic Memorial, Waterloo, Jerseyville, and Mount Zion all won by more than one possession. Mascoutah, Highland, Collinsville, and Mount Vernon all suffered loses in their opening week of action. Highland’s lose is the most interesting of any of those results since they had not lost a regular season game in over three years.

Next week the Knights of the gridiron will make the short trip to Collinsville’s turf field. Collinsville lost a 26-0 contest last week to the Comanches of Cahokia.

The Kahoks were only down by a score of 6-0 at half time of that contest though.

Last year, the Kahoks defeated the Knights in an offensive explosion by a score of 46-27. Overall, the Kahoks went 3-6 in their 2018 campaign. The Knights are 4-2 against the Kahoks over the last 6 years.

Some of the key returners on offense are Chris Chi(QB), Jayden Nabors(RB), and Kyler Williams(RB). The defense returns less starters but one is Dante Williams(DE). Jake Holten is another starter from last year who will play both offense and defense for the Kahoks.