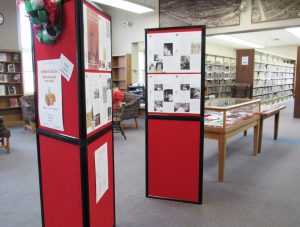 “Cooking Italian with Artusi and Area Chefs” opened at the Collinsville Memorial Public Library on Sept. 1. The exhibit runs through October 15, in the main lobby.

This year’s theme is a dual celebration of the 100th anniversary of the unification of Italy and local Italian chefs.

Pellagrino Artusi was born in Forlimpopoli in the Italian province of Romagna on August 4, 1820.

His most famous cookbook La scienza in cucina e l’arte di mangiar bene (The Science of Eating Well), published in 1891 was the first cookbook published since unification of the country was completed in 1869 (many did not consider unification complete until the end of World War I, hence the 100th anniversary being celebrated currently), bringing together the 110 states of Italy for the first time in a language everyone could understand (food) in a place everyone was comfortable (their own kitchen).

The Science of Eating Well was a synthesis of local traditions and celebrated the diversity of the new country.

After “a number of Italian publishers…snubbed Artusi’s manuscript,” he self-published the book at his own expense and sold 1,000 copies in the first edition. The book was reprinted 13 times and sold over over 52,000 copies before Artusi’s death in 1910.

The book was geared not towards professional chefs as was customary at the time, but towards middle class housewives. Because of this feat, Artusi was dubbed the “Father of Italian Cuisine.”

Artusi was not a trained chef, but was a businessman who retired. He was able to live on his inheritance as the sole survivor of his parents to pursue a leisure life of literature and cooking hobbyist.

All of his recipes were created as experiments in his own kitchen and written in a story-like manner which included the historical significance of some ingredients.

In addition to the history of Italy and some of Artusi’s recipes (displayed in both Italian and English) the exhibit includes quotes about Italian cooking from celebrities, cooking gadgets from Chef’s Shoppe in Edwardsville, and questionnaires filled out by chefs and owners of local Italian eateries including Pasta House, Bella Millano-O’Fallon, Mungos, and Ravanelli’s.

Some of the questions area chefs answered include “Where do you get your recipes?” “What are your TOP 5 (or more) important COOKING TOOLS and EQUIPMENT in your restaurant kitchen?” and “What are 5 (or more) INGREDIENTS you use most in your kitchen?”

The library has kicked off the Italian Fest season for over 13 years with exhibits of local interest.

Italian immigrants came from) and coal mining (the industry that brought the immigrants to the United States).

The curators Annette Graebe and Barbara Klein received special assistance from Sharon McAley and the Italian Cultural Center in Chicago in putting together this fine exhibit.

Veterans Assistance Commission Is Here To Help All Veterans