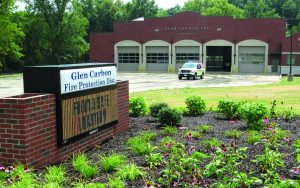 A stairwell rises four floors to a jumping-off point where firemen can practice rappelling and rescues. A meeting room brightly lit by LED – as is everything else in the building – has the capacity to hold up to 60 firefighters and their notebooks and pencils and coffee cups. A laundry room with a washer and dryer offers a place to decontaminate firefighters’ clothing and gear after a hazardous materials situation.

What was only a plan on an architect’s drawing board a year ago is now the new Glen Carbon fire station.

And the public is invited to tour it at an open house. Two, in fact.

The first event is scheduled on Saturday, September 28 from 10 a.m. to noon.

“We plan on having probably having a little dedication of the building, a ribbon-cutting, we’re going to have some guest speakers,” Glen Carbon Fire Chief Ralph Well said recently.

“The hope is that most of the people involved in the construction of the building will be here so we can pay tribute. We’ll have tours of the building,” he said.

A second open house with family fun and activities will be held on Saturday, October 12 during Fire Prevention Week.

“We’ll give fire engine rides,” Well explained with a smile. “We’ll have a blow-up for them and, again, tours.”

The first big event was originally planned for July. But weather delays during construction and other things that needed to be taken care of after the building had been completed pushed all plans into the fall season, although the station began taking fire calls “around the twenty-second of July,” according to Well.

“We’re pretty much finished with this building as a whole,” he said. “We’re adding some things.”

What this building has that the old building hadn’t was “much-needed space,” according to Well.

“It’s got a training tower, which we didn’t have,” he continued. “It’s got offices out here for the trustees as well as for the  officers with the department. We’ve got a workout room which the old station downtown didn’t have. A kitchen and day room, which is much improved over what we had. We brought it up to time.”

The training tower is where the firemen practice rappeling, water and confined space exercises. It has a trolley system with hooks for drying hose as well.

Also new is the decon room where turnout gear and clothing are decontaminated in washing machines and dryers, four bunk rooms for sleeping EMS workers, a day room with four big easy chairs where personnel can lean back and watch a big-screen television, a computer, a kitchen with coffee makers and an industrial supply of creamer and a larger workout room with exercise equipment. A door opens into a small meeting room with an oblong table and a wet bar and a large meeting room with several rows of tables and a large screen for classes shared with other area fire protection districts. Efficiently and aesthetically designed by the architect.

A “ready room” offers a place for department members and personnel borrowed from other fire protection districts to sit down and drink coffee and ready their gear when the regular crew is out on call and to answer any new calls that come in while they’re gone. A reception room up front stands ready for a secretary or clerk to be hired later.

Even the colors in the department flag have been changed   from blue to orange. All is new.

“The building is open to the public,’ Well said, “especially since we’re behind the bike trail. The front door and the secondary door are both open so they can make their way in if they need to use the restroom in the foyer area and if they need help then they’ve got access to us as well.”

He said that the doors are open from 8 a.m. to 8 p.m. After that, the building automatically locks down but the very front door remains open and if they need help a push-button that leads back to the day room area lets them reach night-shift workers.

“The department itself is volunteer,” said Well. “The ambulance service is here 24/7 and we have nine full-time medics and then nineteen or twenty part-time personnel. That’s the EMS side. On the fire side, there are thirty-three members who are paid on-call.” He added that the ambulance service now has sleeping quarters, something the old building did not have.

A call suddenly came in over the station’s public address system during the interview. Emergency personnel rushed into two vehicles and quickly drove off to one of the area nursing homes. Business as usual in the new station that the chief thinks will meet the needs of the community for the next 50 or 60 years.

“It kind of depends just where the village goes,” Well said. “We have an interstate to cover. We’re always looking at new types of rescue equipment to see what’s better on the market for the department.

“We know the day’s going to come somewhere down the road that they’re likely to have full-time people but right now they’re able to meet the needs of the district and having a full-time ambulance service certainly helps out on the medical side,” he said.

The old building served the community for sixty years, according to Well. That structure was razed in June. Glen Carbon’s other existing fire station, the one located near Illinois Highway 159 (Station 2), remains the same.

“We’ve got ambulances stationed here at Station One,” he said, having already pointed out the proximity to the interstate, “and engines are stationed out of Station Two.”

The new building boasts the latest technology. But, in a tribute to old-fashioned firefighting, a pole – the kind they used to slide down on the way to the next fire –  stands on display near the new gear room.

“It’s not to be used by the fire personnel,” Well said, “because we don’t have a second story.”