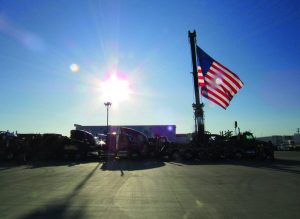 Most of the athletes present were from the Triad School District because of their close partnership with the Troy Police Department.

The largest chunk of money raised came from the live bid for Lead Truck, which raised $20,000.

Tim Braun, owner of William F. Braun Milk Hauling Inc said that he has never had more than one other company bid against him each year. He decked his trucks out with flags, lights, and special mud flaps signed by the Special Olympic athletes.

Seventy-three trucks participated in the 26.2 mile convoy, over double the entry rate for the first year. The convoy went south on Interstate 55 to Interstate 255 then north to Interstate 270 before returning to Troy on Interstate 55 south. The entry fee for each truck was $100 and included a swag bag and dinner from 2 Girls 4 Wheels.

Police from Troy, Maryville, Collinsville, and Glen Carbon helped with traffic control so the trucks could safely merge and stay together.

The first truck convoy held in Illinois was in Tinley Park and has been occurring annually for over 10 years. A third is held in Hoffman Estates.

The Troy Truck Convoy is held each year during Truck Driver Appreciation Week. It is the largest fundraiser the Troy Police Department holds for Special Olympics. Other fundraisers include