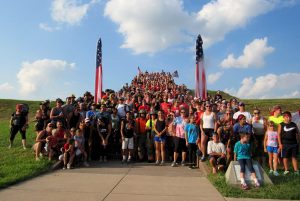 Participants in the stair climb at Cahokia Mounds pose for a photo. Photo by Stephanie Malench

The high heat and humidity did not serve as a deterrent, as organizers said this was the largest number of participants yet.  This year’s event drew over 400 participants from every walk of life, from moms with children to first responders in full gear.

The first years people expressed frustration to the Browns because they couldn’t go as fast as they wanted for a workout. As the couple talked about it after one event, they came to the realization that it was the same way exiting the twin towers; “you could only go as fast as the person in front of you.”

For safety purposes, they do have the people going up on one side and down the other even though the first responders and evacuees had to take turns.

Firefighters from State Park and French Village completed the climb in full gear.  First responders were also present from 15 different agencies in the Metro East including Troy, and Collinsville, as well as the Illinois State Police and an FBI Swat team in full gear. The farthest first responder participant was a member of the Grantfork Police.

The Brown’s 13 year old daughter sang the National Anthem before participants lined the stairs for a group photo before being sent up the stairs in waves of 50 until everyone was on the stairs.

Nine “laps”, or trips up and down the stairs, is the equivalent of the 110 floors in each of the twin towers.  Six laps, or 78 floors is the farthest first responders could go in the south tower and 5 laps, or 62 floors was as far as rescuers could go in the north tower.

Participants could go up and down as many times as they wanted.