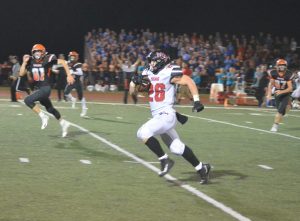 Sam Yager of Triad rushes for a 59 yard rushing touchdown in the fourth quarter of the Knights game against Waterloo. Yager scored four touchdowns on the night from his fullback position. Photo courtesy of Waterloo Republic-Times

After winning their conference opener, the Knights are tied atop their conference with the other two winners this week, Civic Memorial and Mascoutah. The squad also earned their fourth win of the year, which means they will only need one more to be playoff eligible.

Triad started off their most recent game by kicking off to the Waterloo Bulldogs. Josh Edison provided the first big play of the night by intercepting a Waterloo pass on their first drive. After a short drive by the offense, Travis Speer converted a 30 yard field goal to give Triad a 3-0 lead.

Speer kicked a touchback to start Waterloo at their own 20 for their next drive. Triad’s defense quickly came up with another takeaway, in the form of a fumble recovery. Following a quick drive, Sam Yager scored the Knight’s first touchdown of the night on a two yard rush. Speer tacked on the extra point to take a 10-0 lead.

Speer was put into use for his third kickoff of the evening and he delivered yet another touchback. The Knights were unable to deliver another takeaway on defense but they still forced a Waterloo punt after a short drive. After receiving the punt, Triad started their drive on their own 20 yard line.

Early on in the offensive drive, the first quarter ended. Following the direction change, both Logan Wongler and Amaziah Lusk has lengthy rushes to move the offense forward. Shortly after their gains, Triad scored their second touchdown of the game on a 23 yard pass from Wongler to Devin Wilkins. Speer scores his fifth point of the game on the ensuing point after try.

The Bulldogs offense started off deep in their own territory after Speer booted another kickoff to them. Waterloo had moderate success on their drive but they were ultimately forced to punt to Triad yet again. Unfortunately for the Knights, they muffed the punt and their opponents recovered the ball at their 1 yard line.

Triad’s defense couldn’t make up for the special teams error as they surrendered a 1 yard rushing touchdown to their foes. A successful extra point kick made the score 17-7 late in the second quarter.

Waterloo’s subsequent kickoff was good for a touchback to start Triad at their own 20 yard line. The offense drove down the field for a distance but were forced into their first punt of the matchup. This gave Waterloo possession at their own 36 yard line.

The Bulldogs offense came out strong to try and decrease their deficit before half time arrived. They methodically drove the ball deep into the Knight’s territory and converted a big third down on their 21 yard line. Triad’s defense finally stopped them at their own 4 yard line, where they set up for a field goal.

Thankfully for the Triad squad, Waterloo’s kicker pushed the kick too far to the right and missed the attempt. The visiting offense did drive the ball down the field quickly after the turnover, but time ran out in the half before any more scores could be earned.

Triad’s special teams set the offense up to open the second half by bringing the ball to the Triad 44 yard line. The Knights offense took advantage of the great field position and tacked on another touchdown. The score was earned by Yager on a 1 yard sprint and Speer earned another extra point for team afterwards.

Afterwards, Speer booted another kickoff that put Waterloo at their own 20 yard line. The Bulldogs were pushed back to their own 11 yard line on third down but their offense stepped up and threw an 89 yard pass to earn their second touchdown of the night. Their kicker tacked on an extra point, which would prove to be their final score of the game.

The Knight’s defense shut down their opponents drive without letting up a single first down. The home team elected to go for the first on fourth down but were ultimately stopped. This gave the visiting offense the ball on their opponents 42 yard line.

After a few plays on the offensive drive, the third quarter of the game expired. Triad added onto their lead in short time as Luke Foreman ran a counter in for a 28 yard score. A Speer extra point kick extended the lead to 31-14, in Triad’s favor.

Speer delivered another kickoff to the Bulldogs to give them their first possession of the fourth quarter. The home team drove the ball onto the Triad end of the field but the Knights held the to another turnover on downs.

Yager quickly seized the opportunity for the Knights by rambling for a 59 yard rushing touchdown. This was Speer had a passing attempt on the extra point but his pass fell incomplete, so the score remained 37-14.

Speer’s following kickoff was better than his throw and put the Bulldogs deep in their own territory. The Knights defense continued their dominance and forced Waterloo to punt from their own 11 yard line. The Bulldog’s has an abysmal punt that went only 4 yards and set Triad up in great field position.

Triad’s fullback Yager scored his fourth touchdown of the night on the next drive after a 7 yard scamper. Speer drilled the extra point through the uprights for yet another extra point conversion. This gave the visitors a 44-14 lead and proved to be the final score of the evening.

Triad’s defensive unit wreaked more havoc on their opponents by intercepting a pass on the next possession. The offense did not capitalize on the opportunity and had a turnover on downs. This gave the ball back to Waterloo who held onto the ball until the clock ran out of the game.

Next week, the Knights  return to home to host the Jerseyville Panthers. The Panthers are 1-3 on the season and lost last week to Civic Memorial by a score of 21-14. Players to watch on the Panthers squad are Matthew Jackson(Quarterback) and Zeke Waltz (Running Back).