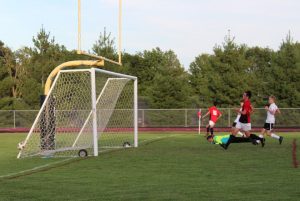 Highland’s goalie watches from the ground as Triad knocked the ball into net for a goal.

Triad’s boys soccer team came out strong in a home match against Highland this past week to keep their undefeated season record intact. Their first tally on the scoreboard came six minutes into the game on a header from Joe Wade. Roger Weber furthered the gap by burying a shot into the bottom left corner of the goal at the 11 minute mark. About a minute later, senior Travis Speer tapped a goal in over Highland’s goalie to take a commanding 3-0 lead.

The visiting Bulldogs did slow the home side’s scoring four awhile after that. In the 19 minute, Speer scored for the second time on the night with a shot in the bottom left of the goal. This proved to be the final score of the first half.

The second half was a much more defensive game with neither team scoring early on. However, Wade used his head yet again to net a goal in the 20 minute. He nearly booted a third goal in awhile afterwards for a hat trick, but his shot went wide right. The Knights held the score in place for the remainder of the game to win 5-0.