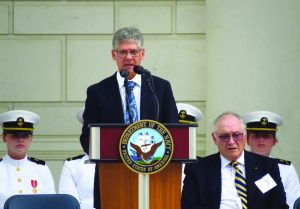 If you were reading or listening to the news on April 10, 1963, you would have been among the millions of American that day to hear about the tragic loss of 129 men aboard the USS Thresher, a nuclear-powered attack submarine stationed off the coast of Cape Cod.  It was one of the worst such cases on record.

Due to what is believed to have been a piping failure, the sub lost power and began sinking, ultimately imploding and leaving pieces and debris scattered on the ocean floor approximately 8,400 feet below the surface. No remains were ever recovered.

The facts of that day will also be familiar to anyone who has gone through Submarine School since then, due to the Navy’s successful effort to establish SUBSAFE -— a submarine safety  program that owes its existence to the Thresher incident.

Metro East native Kevin Galeaz, who grew up in St. Jacob and now lives in Hooksett, New Hampshire with his wife, Robin, is among those who have trained under the program — and then some. 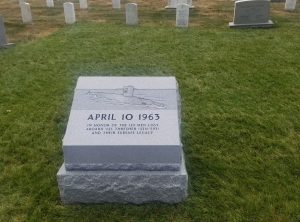 He is a 1975 graduate of Triad High School and the son of Pat and Joe Galeaz of St. Jacob.

Galeaz currently works as a design and validation contractor for Digital Prospectors, assigned to MIT Lincoln Laboratories. In a timeline that begins nearly from the day he enlisted however, Galeaz’s life has become interwoven with the memory, events and lesson’s learned on that fateful day in 1963, and with the life-saving safety protocols, training and record-keeping measures put in place afterwards to prevent it from ever happening again.

Held on Sept. 26, the ceremony has received considerable publicity, including a Sept. 26 article in the Washington Post by Michael E. Ruane, “Nuclear submarine USS Thresher was said to be America’s best, then tragedy struck.”

On Saturday, October 12, coverage of the event will be broadcast on  American History TV on C-SPAN3, at 10:30 p.m. Eastern time.

“My belief that the best way to prevent a similar tragedy from occurring was to tell this story on a national level through the 3-million annual ANC visitors,” Galeaz said in email correspondence with the Times-Tribune. “This memorial not only commemorates and and honors the sacrifices of the 129 men lost, it perpetuates their SUBSAFE legacy that has, and continues to, protect the lives of the men and women who service on our nation’s submarines.”

A Cold War Submarine Veteran, Galeaz served on Ballistic Missile Submarines from the years 1975 to 1982. After completing Basic Training at NTC San Diego in 1976, he went on to complete Submarine School and Ballistic Missile Fire Control Technician “A” and “C” Schools in Dam Neck, Virginia. In 1986, he earned a Bachelor of Science Degree in Electrical Engineering from the University of New Hampshire.

“At Submarine School in Groton, CT, every future Submariner learns about the tragedy and SUBSAFE (Submarine Safety Program) legacy of USS Thresher,” Galeaz said. “Every time we dove for a 70+day patrol, we surfaced with assurance to return to our families because of the SUBSAFE changes incorporated into how submarines were built, maintained and operated. Prior to Thresher, we lost an average of 1 submarine every 3 years due to non-combat related incidents. Since Thresher and the inception of SUBSAFE, we have lost zero SUBSAFE certified submarines.”

It was during his senior year at the University of New Hampshire when events began to foreshadow Galeaz’s coming involvement with the Thresher Memorial. Leading a multi-disciplinary student engineering team, Galeaz and team members spent a year on a National Science Foundation Sea Grant Project, building a prototype tether cable manager in order to control the fiber obtic cable connected between the Woods Hole Oceanographic Institution and the ROV Jason (remotely operated vehicle).

“We were told the work was for Bob Ballard’s Titanic search mission. It was not until November 2017 that the Navy declassified the real purpose of the Titanic mission, to locate, photograph and video both the USS Thresher and USS Scorpion, the latter lost in May of ‘68 due to what is believed to be a battery fire,” Galeaz said.

In 1999 he joined the local chapter of the United States Submarine Veterans Inc (USSVI), named Thresher Base, in Portsmouth. The USSVI’s national charter is to perpetuate the memories of the men lost about US submarines, with Thresher Base’s charter focing on the men lost about USS Thresher, Galeaz explained. He was appointed chairman of the annual USS Thresher Memorial Service in 2003, 40 years after its loss.

Under Galeaz’s leadership a USS Thresher Family speaker was added to the annual services.

“Facilitating this connection between the families and those responsible for ensuring that the implementation of SUBSAFE continues is one method to help minimize the likelihood of another similar tragedy from occurring,” Galeaz sais. “Each year, a different family is chosen and in the process, I have made lasting bonds. At the 50th (2013), 690, 4-generations of USS Thresher family and former crew attended our service.”

In 2012 he approached a family member who had worked for years on establishing a national monument, asking if he could lead a new effort, and the rest is history.

It took a lot of hard work, long hours, and more than just a few hurdles, however.

That work included building a website, undertaking a letter-writing campaign, and dealing with management and space issues at ANC. Legislation passed by the U.S. House in 2012 was one of many things that threatened to derail the effort.

“This legislation required any NGO seeking a memorial in ANC to have secured funds prior to requesting permission, not only for the monument erection, but for its perpetual care and replacement for hundreds of years. Thus, our memorial that cost less than $5K to erect would require an additional $50K be raised for a perpetual trust prior to submitting a commemorative monument proposal to ANC,” Galeaz said. Another hurdle the legislation created was a requirement that “the sponsoring organization provide(s) for an independent study on the availability and suitability of alternative locations for the proposed monument outside of Arlington National Cemetery.”

Galeaz pressed on and through his contacts located a history professor at Belmont Abbey College, who crafted an independent study concluding that the memorial to USS Thresher belonged in ANC.

“In November 2017, I received word from ANC that the Vietnam Helicopter Pilots & Crew Members memorial had been approved after a 5-year process,” he said.

Other hurdles experienced during the 5-year long process by the Vietnam Helicopter Pilots & Crew Member memorial project were many. “They were the first to attempt approval under the new legislation designed to protect the limited remaining burial space. We leveraged their design to move through the approval process in record time. Our proposal was submitted on July 12, 2018 and we achieved Secretary of the Army approval on January 28, 2019. We then worked with ANC over the spring of this year to optimize the memorial location before submitting our proposal to the US Commission of Fine Arts (CFA) CFA approval of the memorial design and location was received on July 20, 2019,” Galeaz said.

Fundraising from a non-corporate donor project began in April 2018 and by July had raised approximately $43,000, moving the project that much closer to reality. By November they had raised made it through the first three levels of approval and raised about $53,000.

Galeaz said he has the deepest respect and love for the families of the men lost aboard the USS Thresher, developed since first leading the annual memorial services in 2003, and expressed his gratitude to those at ANC responsible for approving the memorial.

His parents are one of the inspirations in his life he said, both of whom “have lived their lives in service to their community through their church.” Triad High School teachers, coaches and administrators are another — teaching through example how to inspire others, he added.

Masks and Vaccines Strongly Encouraged, But Not Required At Triad Schools