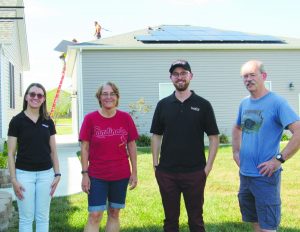 When Elisa D’Antonio of St. Jacob decided to go solar to reduce her carbon footprint, she was also looking for a way to store the energy for times when the electricity goes out. For the first time this year, local homeowners had the option to incorporate Tesla Powerwalls into their home’s solar arrays.

D’Antonio recently had four solar subarrays and two Tesla Powerwalls installed on her property. Two of the arrays are on her house with both powerwalls in the basement and two subarrays on her airplane hanger, which butts up to the Metro East Airport runway.

D’Antonio’s decision to pair the Tesla powerwall with her solar installation was multifaceted. “First, federal and state incentives are at a high and will be deceasing over the next several years. Second, I share the concerns of many over my personal carbon footprint and I am always looking for ways to reduce that. Finally, although the power outages in this area are far less frequent than 13 years ago, they still occur and I like to be prepared, which has driven some of the unique design features of my system.”

The system has 12.92 Kilowatts panel wattage, which will provide 70% of the electricity for her 2,600 square foot house. The powerwalls will store extra energy D’Antonio doesn’t use so she can run most of the electronics on her property during a power failure except the hanger door, air conditioner or other major appliances for a few hours.

The extra energy generated can be turned into wholesale credits or self-consumed at night to avoid using electricity.

Inside the basement, a gateway, combiner panel and envoy are hooked up through a wired internet system that helps the homeowner and the state monitor the effectiveness of the system on a cell by cell basis.

She also has a propane source for back up, as well as a gas stove and fireplace.

One Powerwall panel weighs just over 250 pounds and has its own 10 year warranty.

Solar panels are light, weighing only 40 pounds each and come with a 10 year workmanship warranty, 10 year production warranty and 25 year warranty on microconverters and panels. They are hail tested with 1 inch steel pellets fired at 50 mph.

Straight Up Solar does all of the installations and has 5 crews of installers and electricians, plus 4 preferred partners for when business is heavy.

Although the Solar Power Hours for this year are over, residents of Madison, St. Clair, and Monroe counties can still get on board for discounted rates on solar panel installations through the group buy program.

More information on the program is available at http://growsolarmetroeast.com.