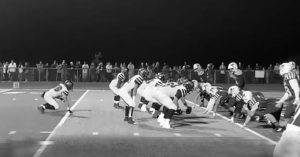 The Triad football team clinched a playoff berth this past week after visiting conference foe Mascoutah. Mascoutah’s loss drops them to 3-3 on the season and 1-2 in conference play. Triad’s win pushed them into first place in conference with a 3-0 record.

The matchup started with a Mascoutah kickoff that Triad brought out to their own 35 yard line. Triad’s offense slowly marched down the field with a 7 minute drive that was capped off by a rushing touchdown from quarterback Logan Wongler. Travis Speer converted the extra point to make the score 7-0.

The Indians responded by taking the following kickoff into Triad’s territory. After a short drive, Mascoutah quarterback Devon Ross dropped back and threw a 30 yard touchdown pass. Unfortunately for the home team, their following point after try was unsuccessful so they still trailed 6-7.

Triad took the subsequent kickoff out to their own 21 yard line. Mascoutah’s defense came up with the first stop of the night and forced the Knights to punt the ball away. Roger Wolf’s punt for Triad pushed Mascoutah back to their own 33 yard line.

Only one play into the Indian’s drive the first quarter expired, with the score still 7-6 in Triad’s favor. The Knight’s defense stepped up quickly to force Mascoutah into a punt. A short while later, Mascoutah’s defense did the same and gave their offense the ball at their own 27 yard line.

Over the next three minutes of play, the Indians pushed the ball to Triad’s 25 yard line. Triad forced them into a fourth down shortly afterwards, but the Indians offense prevailed to keep the drive alive. Ross capped off the drive with a 7 yard touchdown pass to go up 12-7. Mascoutah elected to attempt a two-point conversion, but the Knights defense kept them from scoring.

Triad’s special teams set their offense up well on the next kickoff by bringing the ball out to their own 27 yard line. Wongler came up big for his team and had an explosive run all the way down to Mascoutah’s 12 yard line. However, it was ruled that he fumbled the ball and the Indians took over at their own 12 yard line.

The Indians rapidly began driving down field with only 3 minutes before the end of the half. They had crossed into Triad’s territory, but Anthony LaRue came up big with an interception to halt their offensive. Triad attempted to score again before the half expired, but it was to no avail.

Speer started the second half of the game off with a touchback to put the Indians back at their own 20 yard line. Triad earned a turnover on their second outing in a row by forcing an Indian’s fumble on the Mascoutah 39 yard line. Despite the great starting position, Triad turned the ball over on downs shortly after to give the ball back. This started Mascoutah’s offense out at their own 37 yard line.

The visiting squad had ran three straight plays starting at their opponent’s one yard line before Amaziah Lusk scored a touchdown on a pivotal fourth down play. Triad choose to attempt a two point conversion, which they scored on with a two yard pass to Lusk. Speer booted the ball to the Indians on the following kickoff and the Indians managed to return the ball out to their own 15 yard line before being tackled.

Triad’s defense forced a punt from Mascoutah to preserve their 15-12 lead. This set the visiting offense up at their own 38 yard line with 7 minutes remaining in the contest. The Knights moved into Mascoutah territory thanks to a long run from Lusk. Triad maintained possession until there were two minutes remaining when they turned the ball over on downs.

Mascoutah began their potential game-winning drive at their own 23 yard line. After dropping back for a pass on a fourth and seven, Mascoutah’s Ross was sacked by Sam Yager. This put Triad’s offense only 15 yards away from the Indian’s end zone with a little over two minutes remaining.

The Knights extended their lead a short while later with a 12 yard carry by Lusk. Speer extended their lead by converting the following extra point to go up 22-12. The Knights chose to squib kick on the ensuing kickoff but the Indians still managed to bring the ball out to their own 42 yard line. Josh Edison sealed the game for Triad by intercepting a Mascoutah pass which allowed Triad’s offense to run the clock out.

Next week, Triad will play host to their rivals Highland for their Homecoming game. The Bulldogs will enter with a 3-3 record overall and a 2-1 record in conference. Highland is currently on a two-game winning streak including a 64-28 rout of Civic Memorial last week. Players to watch for Highland are freshman Brent Wuebbels(quarterback), junior Logan Chandler(running back), senior Trevor Zobrist(offensive tackle), and junior Sam Buck(offensive guard).