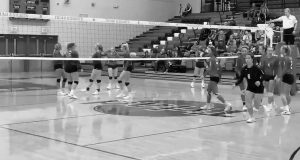 The Triad volleyball team pictured after winning a point while playing Salem.

The 2019 Triad volleyball season has seen a marked turn around in play and results to this point in their season.

The Knights were 10-10 overall and 3-3 in Mississippi Valley Conference play.

Triad began the season 3-7 after a loss to Fort Zumwalt (Mo.) West at the Alton tourney. Since then they have gone 7-3.

“The girls have been playing well all season. I think a lot of it is just gaining that confidence to win. The skills are there and they go right up to the end and we just can’t quite close out. I think they’re gaining some confidence as the season goes and it’s making a difference in their play,” said Triad coach Jami Parker.

The Knights began a three game winning streak on September 14th by winning their final two games at Alton.

In the final game at Alton they defeated the host Redbirds 25-20, 25-16. Lauren Johnson and Alexis Butler led in kills with six each. Johnson added two blocks as well.

V. Butler has 12 assists while Hays and Chloe Sax each had two aces.

On September 17th, they won their MVC opener at Mascoutah 25-23, 25-19. A. Butler and McCurley both had six kills. McCurley also added three blocks.

On September 26th they went to Jerseyville and returned with another three set victory 25-19, 20-25, 25-22. Johnson and Chloe Sax each had seven kills. McCurley had seven digs.

That completed a road stretch with a 6-1 record.

“Anytime we have older players on the floor, you just have a little bit of maturity, a little bit of experience. The seniors definitely have goals they want to accomplish this year and a lot of time those goals those seniors have will drive their season…their fight. I think the leadership they’ve been providing is absolutely wonderful,” Parker said.

Last week the Knights lost a tight match 25-22, 26-24 on Tuesday to Waterloo and fell in three sets at home to Mascoutah on Thursday.

Parker pointed out for the season that six of their ten losses have involved scores of 24 and above; an indication of how close many matches have been. Included among those was a 30-28 1st game loss to powerhouse Breese Mater Dei.