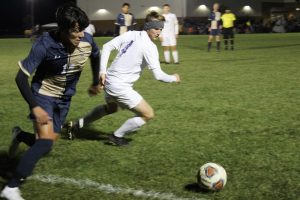 The varsity Kahoks took on the Griffins in Glen Carbon on Saturday, walking away with a 1-0 win. Photo by Steve Rensberry

The Kahoks traveled up the road to Glen Carbon to meet the Griffins on a Saturday night and came back home with a 1-0 victory.

Wes Henze scored the lone goal and was assisted by Nick Corzine.

The Kahoks battled through the weather and untimely goals to beat their arch rivals in a rain soaked thriller 5-4.

Edwardsville came into the game ranked #5 in the stltoday.com large school poll.

The Tigers, who had already clinched the Southwestern Conference title, had their 25-game unbeaten streak in the SWC broken by Collinsville.

“Last night’s victory was a step in the right direction for us. All year we’ve stressed playing simple and together. While at times it wasn’t pretty we worked very hard and played as a solid 11 on the field and 9 on the bench. Everyone was involved which made a huge impact on the game,” said coach Rob Lugge.

The game was delayed just after the starting lineups were announced due to lightning.                However, that did not slow the Kahoks who were in control most of the half until the very end.

With time winding down in the 1st half and CHS in control 3-1, EHS scored with only :02 left on the clock to go down 3-2 at intermission.

The Tigers scored again barely three minutes into the 2nd half to tie it 3-3.

Just after the goal, another lightning delay occurred.

Once play resumed Anthony Coppotelli scored his 2nd goal of the game with 24 minutes to play to make it 4-3. It was Coppotelli’s seventh goal of the week.

“Anthony has had a great week. It’s what we’ve expected from him all year long, so it’s not that big of a surprise. His play is one of the main reasons we’ve had a successful last few weeks,” Lugge said.

With 8:15 left to go Yahir Figueroa scored an all important insurance goal for CHS.

Coppotelli had scored the initial goal of the game for CHS to go up 1-0.

After a Tiger goal, Jayden Redden scored to make it 2-1 Kahoks.

Aidan Hensler contributed a goal to make it 3-1 with three minutes to play in the half.

Coppotelli scored two goals while Ryan Null added a goal and an assist to lead the Kahoks to a 4-0 Southwestern Conference win at home over East.

The win gave the Kahoks a split in the season series with the Lancers.

“It was a good game, we possessed the ball a decent amount. They had chances it’s just our goalie Logan Rader played really well that game. Anything that came near the net he just swallowed up that game,” said Lugge.

Figueroa scored the other CHS goal on an assist from Redden.

Tagg Baker also had an assist during the game.

Coppotelli had the hat trick as the Kahoks beat Gibault 5-2 at home.