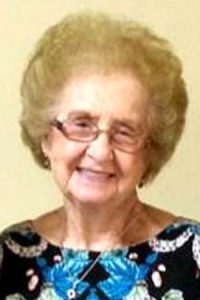 Geneva A. (Lindley) Mattea, 93, of Collinsville, Illinois passed away at 5 p.m. on Monday, September 23, 2019 at Liberty Village in Maryville, Illinois. She was born December 28, 1925 in Advance, Missouri, a daughter of the late Thomas and Leona (Hill) Scott.

She married Lester Roy Lindley in Maryville, Illinois on September 19, 1943 and he passed away on May 1, 1985. She later married Reverend Louis Mattea in Collinsville, Illinois on May 28, 1988 and he passed away on March 18, 2007. She was the owner and operator of Leading Lady Beauty Salon in Collinsville for many years. She was a faithful member of Revive Assembly of God Church in Collinsville. She was known for her amazing skills in baking cakes and pies and had baked and decorated many wedding cakes through the years.

She enjoyed her days of quilting and sewing and always had a cookie jar filled at her home. She will be remembered for the love and special times shared with her family and friends. Geneva is survived by a daughter and son-in-law, Sandy and Ron Snyder of Collinsville; granddaughter and her husband, Charlotte and Brandon Holt of Clayton, Illinois and three great grandchildren, Lilie, Lily and Ava. She is also survived by a stepson and two stepdaughters-in-law, David and Suzy Mattea of Goodyear, Arizona and Judy Mattea of Collinsville; three stepdaughters and two stepsons-in-law, Jan Persons of Pittsburgh, Pennsylvania, Shari and Ray Butler of Lancaster, South Carolina and Sandra and Roger Tinti of St. Louis, Missouri; many stepgrandchildren; stepgreat-grandchildren; and stepgreat-great grandchildren; many loving nieces; nephews; other extended family and many friends. In addition to her beloved husbands and parents, she was preceded in death by a stepson, Reverend Ron Mattea; a sister, Veda Rising and five brothers, Virgil Scott, Lloyd Scott, Cledis Scott, Darell Scott and Lester Dale Wilson.

In celebration of her life, visitation was held at  Irwin Chapel in Glen Carbon on September 25. Visitation continued at Revive Assembly of God Church in Collinsville on September 26 until time of funeral service, with Reverend Myles Holmes officiating.

Burial followed at St. John Cemetery in Collinsville. Memorials may be made to Revive Assembly of God Church, Heartland Hospice or to the family and may be accepted at the funeral home. www.irwinchapel.com