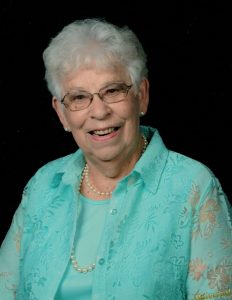 She was born on Wednesday, June 03, 1931, in Highland, IL, the daughter of  Freemon Henry and Cornelia Lena (nee Schoeck) Schmidt.

She was a member of Evangelical United Church of Christ, Highland; Women’s Guild of the church;  Unity Chapter, Order of Eastern Star-Marine.

Mrs. Edwards was born at Highland, grew up on the family farm southwest of Marine in Pin Oak Township.  In 1963, the family moved into Marine; built a new home east of Marine, in 1968 and moved to Highland in 2005.  Marge had worked at SIUE from 1969 to 1999 where she was the University Records Manager for all financial records, student records and all things pertaining to the University.  She received numerous awards for developing microfilm techniques .  She was listed in the Who’s Who of American Business Women.  Mrs. Edwards was also the first women in Illinois to be a Certified Grain Inspector.

Visitation was held on October 15 at Evangelical United Church of Christ in Highland.

Funeral services were held on October 15 at the church, with Rev. Philip H. Kershner, Pastor, United Church of Christ of Marine, Marine,  officiating.

Interment will be at Keystone Cemetery in Saint Jacob.

Memorial contributions may be made to Shriners Hospitals of Children.