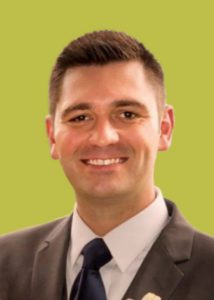 Nicholas Patrick Sauer, 30, passed away on Tuesday, October 8, 2019  in his home in Creve Coeur, Missouri.

Nicholas was born August 27, 1989 in Phoenix, AZ, son of John Patrick and Lisa (nee Coon) Sauer. He grew up in Carlinville and later moved to Troy, graduating from Triad High School in 2008. Nicholas was a proud Tiger, attending the University of Missouri-Columbia and graduating with a Bachelor of Business Administration degree in marketing in 2012. He was also a proud member of Pi Kappa Phi Fraternity.

Nicholas married his other half, Dr. Megan Elizabeth Sauer, on June 25, 2016 and they recently brought their beautiful son, Jackson Patrick Sauer, into the world on January 14, 2019. He is survived by his wife Megan and son Jackson of Creve Coeur, Missouri and their fur babies, Sadie and Bauer Sauer; his father and mother, John and Lisa Sauer of Troy; his brother Joseph Alexander Sauer and significant other, Paola Marcela Rivera of Kansas City, Missouri; his sister Olivia Raye Sauer and significant other Jake Freeman of Troy. Nicholas also leaves his maternal grandmother Sandra O. (Roger) Hurrelbrink of Winchester, IL and his father in law, Jerry L. Frank, his mother-in-law Ann M. (nee Renken) Frank and sister-in-law Madison M. Frank of Alhambra. He is preceded in his death by his paternal grandparents Urban and Dorothy (nee Lumsden) Sauer and his maternal grandfather Richard Coon.

Nicholas began his career with Enterprise Holdings in 2012, rising through the ranks to become a Branch Manager soon after in 2015. Nicholas has been serving as a Fleet Consultant for Enterprise Fleet Management since 2016 and has built a great community of friends and colleagues during his time with the company.

Nicholas’ life was defined by loving those around him fiercely and taking care of his family with his whole heart. Ask anyone that knew him and they will tell you he lived life to the fullest. His personality filled every room he walked into and was a source of strength for many. He loved playing golf, learning about and enjoying whiskeys, being a fan of Harry Potter and spending his Sundays watching NFL Football. More than anything, spending time with his close friends and family brought light into Nicholas’ world. His smile will be greatly missed and his impact will last forever.

A visitation and celebration of Nicholas’ life was held on October 11 at Salem United Church of Christ in Alhambra and on Sunday, October 13, again at the church.

Funeral services were held on October 13, at the church, with a luncheon to follow.

Gifts in memory of Nicholas may be made to Jackson’s College Fund c/o Megan Sauer.