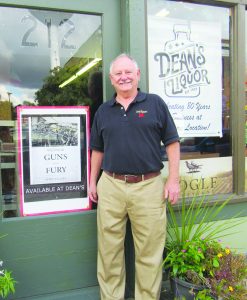 Jerry Dallape stands outside his store in Collinsville. Photo by Stephanie Malench

In the spring of 1966, Jerry Dallape, owner of Dean’s Liquor in Collinsville, was getting ready to graduate from Collinsville High School and needed to figure out what was next.  College was out, as was the steel mill.

He would walk by a poster everyday of a chiseled Marine aiming his rifle.  After inspecting the details of the poster a few times, Dallape decided that was what he wanted to do.

In Vietnam Guns and Fury, Dallape tells the story of his journey through 6 months of boot camp and 13 months in the heart of the Vietnam War as a machine gunner in the 1st Platoon of Fox Trot 2/26 Marines 3rd Marine Division.

Dallape began making notes to write the book about 40 years ago.  As he approached his 70th birthday, Dallape decided if he was going to write the book before he died he needed to get serious.  Once he got serious, it only took him about a year to write the book and get it published.  The book is in the form of a diary, with entries from key points in his journey.

Dallape said most of the people who buy his book are women who had uncles that served in Vietnam but would not talk about it who wanted to learn more.

Vietnam Guns and Fury is available through most online retailers and at his store, Dean’s Liquor at 210 W. Main St. in Collinsville.