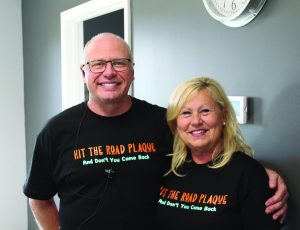 Four doctors, six dental hygienists, and approximately 30 other staff members at Troy Family Dental went the extra mile this past Friday by providing free dental service to dozens of people in the area.

The response was so great that appointments had to be limited later in the morning, but doctors and staff at the office, located on Edwardsville Road in Troy, did what they could to see as many people as possible.

“The response has been excellent,” Dr. Richard Boatman Jr. said around 11:30 a.m. on Friday, as virtually every dental room in the building was occupied and the waiting room nearly full.

“Just to be able to give back and help people that just need help is the most fulfilling thing I’ve ever done in my life,”  he said.

Although they were not set to begin until 8 a.m., people began lining up early, or waiting in their cars — several hours earlier in one case.

Last year the dental office held a free dental care day for children, with this year being the first that focused on adult dental care. Appointments were available for any person over the age of 18, and were available on a first-come-first-serve basis.

“Today, the two doctors work side-by-side within the 8,000 square foot dental practice,” a news release about the events states. “Dr. Boatman and Dr. Spencer are both recognized leaders in their field and have both earned the Top Dentist Award from St. Louis Magazine.” 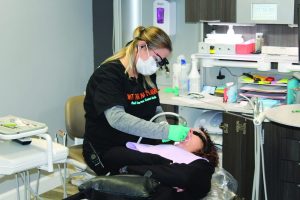 Dental Hygienist Sam Martinez tends to a patient at Troy Family Dental this past Friday. Photo by S. Rensberry

Free Dental Day work began with the public in mind, they said, with both doctors aware of how expensive but necessary dental work can be.

Judging by the flurry of activity on Friday, which appeared to involve just about everyone, it is  clearly a team effort.

Along with Boatman and Spencer, other doctors assisting included Dr. Ben Brubaker from Cambridge Dental in O’Fallon, and Dr. Sarah Modlin from Arch View Family Dental.

“The team here is like a family and the patients can see it from the second they walk in the door. All of the girls and the whole team make the patients feel so welcome and so comfortable” Spencer said.

Boatman expressed his appreciation to the event’s sponsors which included Jimmy Johns, who provided lunch for the staff; Dunkin Donuts of Troy, which provided coffee and donuts for the patients; and Goetze Dental Supply for donating all of the dental supplies used during the event.