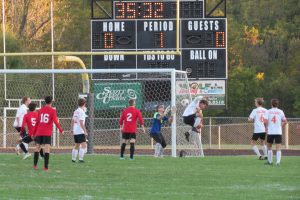 Waterloo’s goalie snags the ball out of the air following a Triad shot on goal, while several Triad players look on. Photo by Anthony Jones

The Triad Knights soccer team suffered a tough defeat to their conference foes of Waterloo last Thursday. The first half of the contest was mostly spent at a tie, until the visiting Bulldogs netted a goal with five minutes remaining. Waterloo managed to take this lead into the half-time break.

The second half was much like the last with a long stretch without scoring, which ended when Michael Tentis buried a penalty kick with 8 minutes to go in the match. Both teams held on until regulation expired with the 1-1 score still intact.

Triad was given the first possession in the ensuing overtime period, but neither team provided any scores in that 10 minute frame. Waterloo took advantage of opening the second overtime period with possession by taking a lead with 6:38 left. However, Roger Weber quickly responded for the home squad with a clutch goal as the period had only 5:35 left.

Since neither team could take the game in the second overtime period, they moved on to penalty kicks. Travis Speer was given the first shot, but was unsuccessful in his attempt. After a failed kick by Waterloo, Colton Clark came on for Triad and nearly had a goal but his shot hit off the crossbar. Eli Kraabel broke the stalemate in Triad’s favor with a goal in the third round, but Waterloo matched with one of their own.

The fourth round proved unsuccessful for both kickers. Triad missed their shot in the fifth round and Waterloo subsequently won on their following shot, despite Triad’s goalie making a good play on the ball and tipping it. The Knights and the Bulldogs are co-champions of the MVC since they both have one victory against the other on the season.