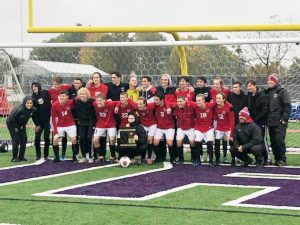 After Triad won at Mascoutah 4-1 on October 15, Knights coach Jim Jackson was concerned that his team was not patient enough. He was concerned about them playing into the hands of the opponents defense.

“If teams are going to play defensively against us, we have to be patient and we have to take what they give us. We have to use the whole field,” Jackson said after that game.

In last Saturday’s Class 2A regional title game, the Knights were faced with that same quality, defensive minded opponent, Mascoutah.

This time Triad’s patience paid off in a 7-0 win in the rain at Mascoutah’s Alumni Field.

“I didn’t know they would play that defensive after losing a couple of guys to cards and injury. So he (Mascoutah coach Nick Carr) threw kind of a wrench in the fire and came out more defensive than I thought he would. We had worked on playing the ball wide all week, to be patient, and still attack.” Jackson said.

The philosophy of playing wide showed up as Michael Tentis scored his first of three goals during the game.

Triad’s Travis Speer played the ball from the left side on a crosser through the box. Tentis out jumped several Mascoutah defenders to head the ball into the back of the net at the 23:30 mark of the 1st half.

“For the first 20 minutes we were having trouble putting one in. It felt good to get that one to go in,” Tentis said.

Perhaps the most important part of the revamped  defensive philosophy was the loss of Lane Hoelscher due to two yellow cards in the semifinal win over Carterville.

“Hoelscher’s a key player of ours, he’s a difference maker when he’s in there,” said Mascoutah coach Nick Carr.

With 19:43 left in the 1st half, Tentis again knocked in a head ball, this time off the crossbar, from a corner kick by Colton Clark.

Finally, with 7:30 to play in the half, Triad’s Eli Kraabel ripped a shot toward the lower left corner, the ball was initially stopped by Mascoutah keeper Oliver Hoybach. But as he finished diving he could not secure the ball and it trickled past the goal line.

Despite the score, the Mascoutah defense played a solid half of soccer.

With time winding down in the half, Triad had a brilliant opportunity to score off a corner kick. The ball came out of a melee of players in front and toward the goal, but Hoybach, with help from Yalkovich, kept the ball out of the net.

“Our effort was definitely there, we played hard, said Carr. “Triad is a good team, we knew what their strengths were and we tried to be able to counter that but they were just really good today.”

Mascoutah had the better of the play to begin the half however Jake Ellis ended that with a goal at the 29:59 mark on an assist from Clark.

Tentis completed his hat trick on a penalty kick with 23:35 remaining in the game.

Austin Borri followed that goal with a penalty kick goal of his own at the 15:50 mark. It was his first goal of the season.

Trent Cissel rounded out the scoring with 3:30 to play. He got a great assist from Patrick Weinacht. Weinacht worked hard on the dribbled to finally defeat his man and make a great pass to Cissel who headed the ball in for a great goal.

Triad was 19-2-3 on the year after the win. They played Wednesday in the Civic Memorial Sectional against Civic Memorial. If they won, they will play the winner of Wednesday’s other semifinal between Chatham-Glenwood and Carbondale for the title. The title contest is tomorrow night at 5:00 in Bethalto.