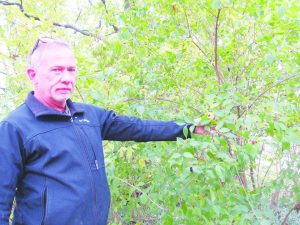 Roger Glotfelty, a member of Cool Cities Collinsville, points out invasive bush honeysuckle near the entrance to Woodland Park in Collinsville. Photo by Stephanie Malench

If you’re anything like this reporter, when you hear the word honeysuckle, you think about a sweet smelling flower used to make perfumes. Unfortunately, much of the honeysuckle we have here is not so innocent or sweet.

Asian bush honeysuckle is an invasive plant that was originally brought to the United States from eastern Asia in the mid to late 1800s for use as wildlife cover, erosion control, and as a landscape ornamental.  It is now found from New England to the Gulf of Mexico and west to the Ozark Mountains. There are two varieties, amur and bella. Both varieties  have narrow, elliptical leaves that are opposite each other with a green surface and a lighter green underside with fuzz.  They have thornless, hollow twigs which are light tan.

The amur honeysuckle is the larger of the two varieties, growing up to 20 inches tall with two to three inch leaves.  The bella bush grows only 6-15 feet tall with one to two and a half inch leaves.

Asian bush honeysuckle is easily identified in part due to its longer growing season and its tubular inch long flowers which start out white or pink and yellow as the plant matures.  The leaves are catepillar resistant. Berries mature in late fall and are carried away by birds and animals where new plants sprout despite the absence of light. The berries are “junk food” and provide no nutrition for birds preparing to migrate.

The bush is considered invasive because it steals water and nutrients in the soil from native plants, provides such a thick canopy that no plants can exist below it. It is difficult to kill and grows rapidly.  This is creating a monoculture, or an environment where nothing else nothing can survive. They can grow in a variety of environments, including lake and stream banks, marshes, sedge meadow, wet and dry prairies, savannas, floodplains, and upland forests and woodlands.

Controlling honeysuckle is a very labor intensive practice. There are three ways to control invasive honeysuckle, including controlled burning, hand pulling seedlings, cutting and herbicide treatments. Cutting the bush down and painting the stump with a 20% herbicide solution is the safest and easiest way to control honeysuckle, as burning is not allowed in many areas and must be done for several years to keep it under control. Because the fire only kills the seedlings and tops which resprout  Pulling the seedlings when the soil is moist is difficult because the entire root must be removed or resprouting will occur and open soil allows re-invasion of honeysuckles or other invasive species.

Other invasive species in our area that disrupt the native ecosystem and harm wildlife include winter creeper and Tree of Heaven.

Many conservation groups routinely recruit volunteers to go on honeysuckle kills at this time of year due to the ease of identifying the bush, including Wildones and the Sierra Club.

On November 16, Cool Cities Collinsville is organizing a honeysuckle kill at Woodland Park in Collinsville. Cool Cities is a committee of concerned citizens who guide the city council on reducing their carbon footprint and cutting down on waste as well as educating and engaging the community. Volunteers will meet at 8 am.  To volunteer, contact Derek Jackson at (618)346-5200×1129.