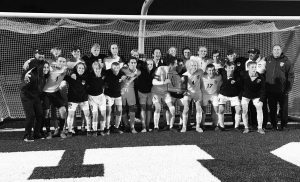 Members of the Triad Soccer Team are shown following their sectional win this past week. Triad CUSD #2 photo

Something had to give last Friday in the Class 2A Civic Memorial sectional title clash between Triad and Chatham-Glenwood.

Neither team had given up a postseason goal.

However, Triad’s keeper David DuPont, his defense and forward Travis Speer brought about the demise of the Titans and gave Triad a 2-0 championship win.

The game was played on Collinsville’s turf field due to last weeks rains.

“Chatham had some chances and we finished ours. We watched them play Carbondale Wednesday and noticed their strength was through the middle. Number nine (Connor Dees) is a really good player, we had Austin Borri mark him the whole game and I think that really messed up their flow,” said coach Jim Jackson.

Late in the 1st half, Triad had a 1-0 lead when the Titans had a great opportunity to score.

DuPont had come out of goal and into traffic but the Titans gained possession of the ball. He scrambled back to his goal line in time to make a high leaping save as he was being hit by Chatham’s Tyler Ryherd’s header attempt to preserve the lead going into the half.

“That’s huge. If they score that goal now it’s 1-1 going into halftime and it’s a different game,” Jackson said.

Triad had broken Chatham’s scoreless string with a header that he snuck inside the post.

“Tucker (Kendrick) found Travis and had a nice pass to him. Travis took a couple of touches and at first we thought it was going wide and it just got the inside of the post,” said Jackson.

Speer would score four minutes into half number two as well.

The play began on another ridiculously long throw in by Michael Tentis. Speer was first to touch it and got it wide to Eli Kraabel.

Kraabel fired a crosser near the back side of the goal that Speer headed into the back of the net for a commanding 2-0 lead..

“He took his time, served a beautiful ball and Travis headed that in. It was..it was fun!” said Jackson.

Meanwhile the defense was holding its own.

“It starts with our back four. Ty Presley and Joe McCulloch they get overlooked because we have an all-state and an all-sectional guy in the middle with Michael (Tentis) and Austin (Borri). Tucker has been back there too. We’ve given up 14 goals all year. That’s phenomenal,” said Jackson.

DuPont registered 10 saves on the day for his 8th solo shutout of the year. He has eight shared shutouts with Brayden Tonn.

“People forget David’s only a sophomore. With him and Brayden our other keeper, we have two strong keepers. It’s strange to think you have two sophomores in goal because they’ve been trained well and they’re talented and they know how to play goalie,” said Jackson.

Triad played in the Chatham Glenwood Super-Sectional Tuesday night against Morton. Results were not available at press time.

The winner plays Friday afternoon in the Class 2A semifinals at 1:00 p.m. at Hoffman Estates High School.

•This is the first sectional title for Triad since 2009.

•That year, Triad beat Marion 1-0 in the title game of the Jerseyville Class 2A Sectional.

•Also in 2009, Triad beat Champaign Centennial 2-1 in the Springfield Super-Sectional to advance to state. That game was on the campus of the University of Illinois-Springfield.

•The Knights won the sectional crown in 2008.

•In 2008, they defeated Highland to win the Triad Class 2A sectional before falling to Springfield Sacred Heart-Griffin 3-0 in the Jacksonville Super-Sectional held at Illinois College.