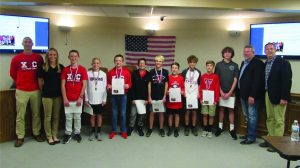 The Troy City Council approved an intergovernmental agreement at their meeting on Nov. 4 between Madison County and the city regarding the use of the right of way along a portion of Troy-O’Fallon Road for a sidewalk.

That sidewalk, council members learned Monday, will be paid for by Madison County Transit and will run from the  MCT Park and Ride lot at North Main Street and U.S. Highway 40 in Troy and travel south along the western edge of Troy-O’Fallon Road to Turtle Creek Road.

Troy Mayor Al Adomite and City Engineer Tom Cissell both commended MCT Executive Director Jerry Kane with taking the lead on the project. Cissell eluded to conversations city officiall had with the agency more than 2 years ago, and about the need and value of connecting more homes and neighborhoods in Troy in such a way.

The planned 8-foot trail or sidewalk will be paid for 100 percent by MCT, along with the engineering costs, according to the agreement, with the city responsible for maintenance afterwards.

Adomite said that Madison County is allowing the sidewalk to be put in an area where it owns the right-of-way, but that the area will be turned over to the city after it is completed.

City Attorney Fred Keck said he knows over very few incidents where a project such as this is paid for 100 percent by another entity, with the municipality having to pay for any of it.

Cissell said construction would probably take place in the spring.

State Representative Charlie Meyer was at Monday’s council meeting to share the news that the Illinois Department of Transportion has included a project in its 5-Year Regbuild Illionis Highway Improvement Program to widen U.S. Highway 40 from the interstate to Triad High School at Bethany Road, from two lanes to four.

The bill sets aside $35 million for the project, Meyer said, making it the second largest project in his legislative district.

When exactly the project will start and finish is uncertain however, though it will start sometime in the next five years given the span of the program.

“What year we’re not sure yet,” Meyer said.