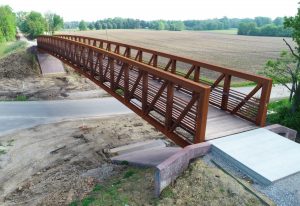 The 10-foot-wide path was christened at a ribbon-cutting ceremony on a chilly Saturday morning in O’Fallon, where dozens of cyclists had a chance to ride the trail between the cities, and officials had a bit of wry fun with the long-awaited project’s many twists and turns.

“This day has been a long time coming,” said Jerry Kane, Madison County Transit District’s managing director. “Based upon our monitoring of social media, we’ve decided we’re going to change the name. Many of you know it as the Troy-O’Fallon Trail; our staff tells me we should call it the MCT Goshen Trail, but based on overwhelming consensus, the name will be ‘It’s Finally Open!”

In 2003, the idea for extending the 12.4 mile long Goshen Trail was identified in a long-range plan of the Metro East Park and Recreation District. By 2017, it had been included in an intergovernmental agreement with MCT.

The new trail connects to 137 miles of bikeways in Madison County, which Ron Jedda, president of the MCT Board, referred to as “a jewel in the region, and probably throughout the country.” The project involved much hard work by many agencies and departments over the years, he said.

“It’s kind of like building a house or building road. You don’t see all the stuff that gets done before you finally pour the asphalt and it opens up.”

Kane praised Troy Mayor Al Adomite and members of the Troy City Council for “rescuing the project at the very end.”

Last month council members approved an ordinance allowing for stop signs to be installed at a 4-way intersection at Wilson Heights Road and Troy Road.

“Without Troy’s unique efforts to ensure the safety of the trail users at Wilson Heights Road, the trail would not be opening today,” Kane told the audience.

The Madison County Trails are a long-term asset that will only appreciate in value, said Madison County Board Chairman Kurt Prenzler. “This is an asset in health. We have so many people in this nation  crashing into Type 2 diabetes. This is a tremendous asset in the health area.”

That sentiment was echoed by Barb Holt. Holt is president of the MEPRD board as well as executive director of the St. Clair County Health Department.

“Talk about a public health success story!” she said. “Geez! All the bikers, all the dog walkers. If this isn’t health in action, I don’t know what is.”

The extension is part of a larger plan to eventually extend the trails to Belleville “so that you can get on your bike, get on a trail, and do a big old circle around both counties,” she said.

The $10 million extension – now officially called the Troy-O’Fallon Extension of the MCT Goshen Trail – runs from the frontage road south of I-55/70 in Troy to Kyle Road in O’Fallon. It is actually an extension of the 12.4 mile-long Goshen Trail which runs from I-55/70 in Troy north through Maryville, Glen Carbon and Edwardsville to rural areas northwest of Edwardsville. It also features a new 38-car Park & Bike Lot at Kyle Road in O’Fallon.

“It had to be rolled into place, from south to north, elevated over everything, the creek, the tracks, the road,” Keller said. “The typical method of lifting a bridge with a crane couldn’t be done because of the high power lines above and the train tracks below.”

“We were all able to breathe a sigh of relief when it finally touched down,” Kane said.

Funding for the $10 million segment came from: