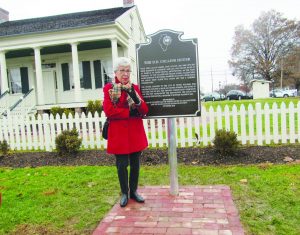 Mary Sue Schusky, daughter of the late Irving Dilliard, speaks to visitors at the dedication ceremony on Saturday. Photo by Stephanie Malench

The historical marker is the 18th in Madison County.  The Collins House had previously been placed on the National Register of Historic Places in November of 2002 thanks in part to the work of the Historic Preservation Commission, making it the first officially designated Collinsville Historical Landmark.

Dilliard was aware of the significance and lineage of the house going back to the village’s first president, Daniel Dove Collins because his grandparents owned the house in the late 1800s.

The first speaker at the dedication was Mary Sue Schusky, the daughter of the late Irving Dilliard. Schusky remarked she is “grateful for her parents, ancestors and family” in preserving the heritage of the house and D.D. Collins for future generations.

Schusky is the 4th generation to be connected to the house going back to 1887 when Oliver C. Look and his wife Kate conveyed the property to James I. Dilliard who married their daughter Mary Look. James and Mary were the parents of Irving Dilliard. Schusky was accompanied by her son Mark and his two children, making 6 generations of the family with ties to the house.

Collinsville Historic Preservation Commission Chair William Iseminger then spoke about the restoration and preservation of the D.D. Collins House from the time Mayor Stan Schaeffer accepted the donation of the house to the city.

Mayor John Miller was the next speaker, reflecting on how the city received flack for using city resources to help preserve the house, but persevered in seeking funding sources so the city could use it as an educational tool for residents for generations to come.

The ceremony concluded with Cindy Reinhardt of the Illinois State Historical Society formally dedicating the marker before everyone went inside for warm apple cider, cookies and donuts.

Collins was a Madison County Judge and cousin to the Collins brothers who founded Collinsville. He was also the first County Highway Commissioner and built the first plank roads in the city.  As the first president of the Village Board, he held the board meetings in the house.

The Historical Preservation Commission of the City of Collinsville began work almost immediately with plans to renovate and move the 1845 Historic Greek Revival architecture house to its present location from just down the block in 2015. This style of architecture is unique for the Midwest and the Collins House is one of the last remaining houses of this style in Southern Illinois.

Renovations of the museum house and acquisition of period appropriate furnishings were completed using County, State, and Federal grants as well as private donations.