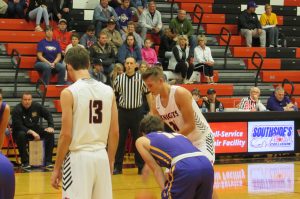 In his first year at the helm for Triad, Jeff Guidry has the boys basketball team off to a 3-1 start. The Knights also have a 1-0 record in conference play after defeating the Civic Memorial Eagles.

The season kicked off for the team in the Stove Top Stuffing Tournament. Their first game was last Tuesday on the road against Nokomis. Triad left that matchup with a 60-49 victory. Luke Cox was the high scorer for the matchup, carving up the defense for a total of 22 points.

On Wednesday night, the Knights played host to the Civic Memorial Eagles. The game was closely contested, but the home team managed to leave with a 52-46 victory. Cox was the high scorer again with a tally of 27 points for his team.

Friday brought the first blemish on to Triad’s record. The Knights travelled to Granite City to face the Warriors. The final score was a 54-45 loss. Nate Winslow led Triad with a 15 point performance.

The fourth game for the Knights was against the Taylorville Tornadoes. Triad help a distant lead of their foes for most of the game. At the end of the game, Triad had a 79-74 lead over their opponents. Winslow and Cox led Triad on the scoreboard, with Kyle Crook scoring a bounty as well.

Winslow and Cox were both named to the all-tournament team for their great performances. The Knights next game is December 10 against Breese Central.