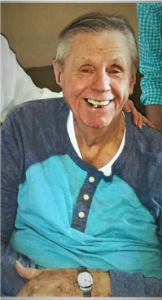 Dalton Junior Box, 87, of Highland, passed away on Wednesday, December 4, 2019 at his residence.

He was born March 20, 1932 in Tennessee to Taylor Noble and Annie (Matlock) Box. He married Ruby Whittington on November 2, 1951 in Piggott, AR. She survives and resides in Highland.

Dalton worked as a trucker with East St. Louis Local Teamsters for 35 years. In his younger years, Dalton enjoyed hunting alongside his sons. He was an avid St. Louis Cardinals fan. Above all else, Dalton cherished the time he was able to spend with his family. He will be dearly missed by all who knew and loved him.

Visitation was held on Dec. 7 at Lake View Funeral Home in Fairview Heights.

Funeral services were held on Dec. 7 at the funeral home.

Memorial donations may be made to Covenant Worship Center of Fairview Heights. Additional condolences may be sent to the family at www.lakeviewfuneralhm.com.

Interment was at Lake View Memorial Gardens in Fairview Heights.

Lake View Memorial Gardens was in charge of arrangements.