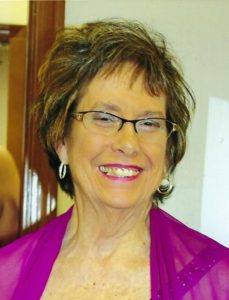 Growing up in Streator, Marilyn attended St. Mary’s Grade School and Streator Township High School. She also attended St. Xavier Convent in LaGrange, and later Kaskaskia College. In her younger years, she worked at Meyer-Sherman Company and Owens Illinois Glass Company before she married James D. Flanigan on September 7, 1957 at Immaculate Conception Church in Streator.  After relocating to Greenville, she worked as a medical secretary at the former Utlaut Memorial Hospital and Greenville Medical, retiring in 1986 to become a full-time homemaker and caretaker of her grandbabies.

Marilyn loved to sing and she had served as cantor at St. Teresa’s Church in Marydale and St. Lawrence Church in Greenville. Marilyn was kind, gracious, and generous. She was loved much by her family and touched the lives of many through her song. She was a faithful Catholic, enjoyed cooking, shopping, and playing bridge.

Funeral: Mass of Christian Burial will be celebrated at 11 am, Friday, December 20, 2019 at the church with Rev. Alan Hunter presiding. Burial will immediately follow at St. Lawrence Cemetery, Greenville, Ill.

Memorial donations in memory of Marilyn are suggested to Alzheimer’s Association. The family is grateful to Marilyn’s caregivers over the past years for their kindness, compassion, and friendship. Condolences may be offered to the family at www.wfh-ofallon.com.

Arrangements were entrusted to Wolfersberger Funeral Home in O’Fallon.