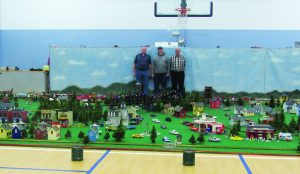 L-R: Randy Take, Duane Take, and their father Don Take stand beside the train show at St. John’s UCC in Collinsville. The display was donated by Don Take and his family and serves as a fundraiser for the church’s youth program. Photo by Stephanie Malench

St. John’s United Church of Christ held a train show on December 13-15 with an at-will offering to benefit its youth program. A little over 200 attendees enjoyed 3 different train displays, from the simple to the intricate, donated by Don Take and his family.

There was also a raffle for a train donated by Take. Guests would purchase a Belief Bell for $5 to be entered in the drawing. The winner was Erin Milkert of Collinsville.

The raffle and the offering raised $500 for the Youth Program.

Take, a member of St. John’s UCC was approached about doing the fundraiser because of its success when he displayed his trains at the church for a fundraiser in 2012. He has also donated his displays for Moose and Kiwanis fundraisers. The largest set on display was 30 feet by 40 feet and took Take, his two sons and their wives nearly 8 hours to set up. The display included three trains that were running at all times, 360 trees sized to scale, 50 buildings, people, and characters from Christmas stories including Rudolph the Red nosed Reindeer and Frosty the Snowman.

The Lego community and train display was contributed by Take’s daughter in law Jessica, Randy’s wife.

She was unable to come to the show, but her husband said she has been collecting the pieces to the village for the four years he has know her and is working on building a beach scene for display.

Take has been involved in train shows for over 20 years and also sells trains and allows others to place their trains in his displays. Although Take is no longer involved in any of the local train clubs, both of his sons are involved in the Highland Train Club.

Unfortunately, collecting trains and displaying them is a dying hobby according to Take. He said young people are just not into it and his train sales are down. He expects to stop selling trains within the next two years. Take expects the hobby to end in his own family with his sons, as all three only gave him granddaughters.

Take is a graduate of Triad High School and currently lives in Glen Carbon. He is a retired food buyer after 13 years at SIUE.